My Lithium Years, which spanned the central chunk of my time at The Institute, started when I had an insight about how we could access the groundwater of County Carlow when the Eastern hilly border of the county was threatened with being mined for Lithium. At one point the People's Corporate of China sunk $2 million into a feasibility study to investigate whether there were economically obtainable quantities of spodumene LiAl(SiO3)2 Up The Blackstairs. The results of our strictly academic investigations of lithium in the groundwater were a) Dr Lithium and b) a lot of very noisy data about the quantities of lithium in the subsurface water across 5 transects of the county. "very noisy data" is what you get when you don't massage your results to fit your prior hypothesis, so that's a win. Even if it's a bit disappointing that there was no clear falling off of [lithium] as you get further than the known spodumene reefs.

In the absurd early days of my teaching gig, I was required to teach water chemistry because nobody else would.  I was supremely under-qualified to do that; but learned a lot and gave the class a couple of genuine hypotheses to test. That was in stark contrast to most of their other practical lab classes where they were typically tasked to "rediscover" some law which everyone had know for 2-300 years. Borrrrring! One question I was genuinely interested in having answered was about the uptake of minerals by trees. Was this driven more by the location [the availability of Fe Mn, K, Ca, whatevs] or by the species [did hawthorn or ash preferentially uptake certain ions regardless of location]. Accordingly, on the way to work one morning, I took twig and leaf samples from these two species at two different locations and had the students measure, record and analyse.

It's a natural forward path from those uptake studies to phytomining: the idea that some plants can accumulate some minerals using molecular channels and bring to the surface for disposal or exploitation elements which are either toxic [whoa cadmium] or valuable [woot gold, silver]. There was a strong thread of research in bio-remediation at The Institute: the idea that you can clean up a toxic waste dump by using specific plants and microbes. It was natural therefore that Dr. Lithium should have bought a bunch of garden vegetable seeds and grown them in the greenhouse in pots with different concentrations of lithium added to the water. tl;dr some plants suck-it-up better than others.

I was haring off down that rabbit-hole of memory because of an article on The BBC about trees in Indonesia that have green sap from the extraordinary levels of Nickel which they are capable of up-taking from the soil. 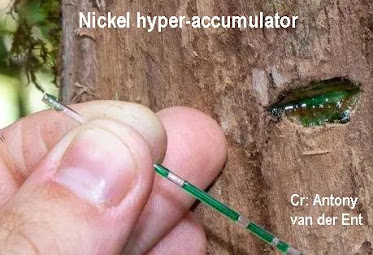 One optimistic estimate is that the best Ni accumulator Phyllantus balgoyii might be able to bring 120kg /hectare to the surface each year. There aren't many crops that can sustainably yield $1,800USD a year from a hectare, certainly not potatoes in Ireland.