The Anniversary of No! Remembering the 28 Oct 1940 response of Ιωάννης Μεταξάς, the Greek Prime Minister, to an ultimatum by the Italian ambassador that Greece allow Axis forces to occupy 'strategic locations' within their Kingdom. Explanation. Later the same day Italian military divisions rolled across the frontier from Albania and were stopped and rolled back into Albania by a determined Greek army. Fighting ceased in February 1941 with the Greek occupying "Northern Epirus" aka Southern Albania. Honour satisfied! Metaxas is a controversial figure in Greek political history: he wasn't above banning books and suppressing elections and preferred a monarchy to democracy but then again his Όχι! was the representative voice of the Greek people. Not least because, on 15th August 1940, an Italian submarine had sunk the Κ/Δ Έλλη a Greek cruiser at anchor off the Greek island of Tinos: 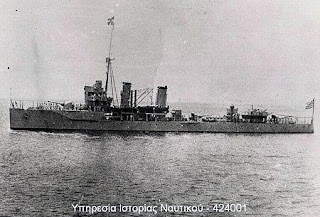 The boys dance.  The boys march. It means something.