I went for a walk across our fields on Sunday last and got to talking with some 🌞heliophiles🌞. As well as finding a novel petroglyph, they also reported that their lunch had been marginally disturbed by a pair of metal-detectorists who were sweeping the ruined steading on the Wexford edge of our common.

Slightly shifty strangers were therefore in my mind as I wandered home from my excursion . . . and saw three young blokes intently searching the grass of my neighbour's 12 acre field. My eye-sight is no longer 20/20, so I crossed over the grass to see what they were doing. Pure curiosity, but I'm not shy that way, and what's the worst that could happen? As I got closer, I realised that they didn't have metal-detectors. Indeed, they seemed both ill-equipped and under-dressed for October in the hills. 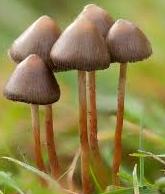 They were not the least bit shy in admitting that they were collecting mushrooms. "What?", I replied, "magic mushrooms, like, Psilocybin?". The very same! They weren't able to say the Latin name Psilocybe semilanceata but knew it as Liberty Cap. It was a bit peculiar because with half an eye and half a brain, I'd noticed some unfarming people coursing across the same patch of field a few days earlier. I'd assumed that those distant bodies were members of my neighbour's extensive family of grown up children. It seems, rather, that the field has a bit of a reputation for accessibility among people in search of nature's bounty.

"As of 31 January 2006, the Government, in the exercise of powers conferred on them by section 2(2) of the Misuse of Drugs Act, 1977, has ordered that ‘any substance, product or preparation (whether natural or not), including a fungus of any kind or description, which contains psilocin or an ester of psilocin is a controlled drug for the purposes of the Act’.1 The effect of this order is to render the possession or sale of so-called ‘magic’ mushrooms criminal offences under the Act. Heretofore, it was illegal to possess or supply magic mushrooms in a dried or prepared state but lawful to possess and sell them in their natural state". 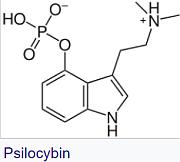 According to The Lads, any upland sheep-pasture is a likely source of the fruiting bodies of  Psilocybe semilanceata at this time of year. Fungi are saprophytic - they get their energy by robbing it from photosynthetic plants. But each species will have a preferred host and a preferred time of year for sending up the obvious part of the organism and shedding a few reproductive spores. Liberty Cap penetrates the root systems of grasses in pasture: the presence of sheep somehow encourages the presence of the fungus. And it seems that sheep will eat the fungus and zone out. Again the lads said that 20-30 fruiting bodies, dried down to 3 grams would be a handy sort of a dose. It is hard enough work down there in the grass to get that much together, so I don't think anyone is making money from the psilocybin trade. Then again, you don't have to look for the fungus in the long grass - we mowed our fields really late this year and they'll still be throwing up their fruiting bodies. The downpour over the last 24-36 hours will have turned the harvest to mush though; or so my informant tells me. And that the vernacular Irish for Psilocybe semilanceata is pookie, although that term might be generic for all basidiomycetes.

My cursory reading of the health issues associated with shrooms implies that they are "mostly harmless". And certainly far less damaging to the population's health than alcohol. But there is far too much money and patronage riding on alcohol to suggest that it too should be banned. otoh psilocybin is being trialled in Tallaght for treatment-resistant depression. Looks a lot like the neurotransmitter serotonin. That seems to be a clue as to its function. John Kelly, psychiatrist in Tallaght and TCD, is recruiting guinea-pigs for his next trial: psilocybin@crp.healthcare and apply, especially if you are clinically depressed and anti-depressants don't work.