It is a while since we were island hopping. Ball's Pyramid is on the far side of the world. It is clear that Lt Henry L Ball RN caught the moment in geological time when this feature was at its sharpest focus, as he cruised past in 1788. He was Captain of the ship transporting a subset of First Fleet convicts from Botany Bay to Norfolk Island when discovered first Lord Howe Island [previous exciting adventure there] and then Ball's Pyramid about 20km distant. The Pyramid is the edge of a long extinct volcanic caldera; formed maybe 7 mya. It will assuredly disappear beneath the waves, but not in your lifetime, or mine. 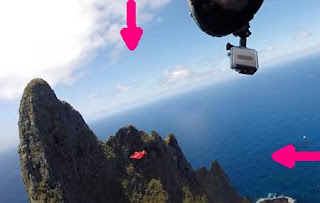 It took 94 years before any [white? literate?] person [Henry Wilkinson,1882] landed at the base of the razor; and another 83 years [Jack Hill and Jack Pettigrew, 1965] before anyone struggled to the summit 560m above the azure sea. Five years ago a couple of wing-suiters, Jeb Corliss and Luigi Cani grazed past [The red blob L travelling at 100km/h] having jumped from a helicopter. They were picked up from the far side a couple of minutes later by a zodiac from a well-placed catamaran.

Needless to say nobody lives on Ball's Pyramid.  Corliss and Cani picked one of the rare days each year when the sea isn't throwing shapes at the cliff face. So landings can be a bit random. And visitors are discouraged since it was discovered that the Pyramid is the last refuge of the Howe Island stick insect Dryococelus australis. Lord Howe Island [pop ~380] at 1400 hectares is much bigger; and Norfolk Island [1,600 folks, 3400 ha] is bigger still. But how much bigger? And this is a classic case where, as Matt Parker discussed recently on Numberphile, your definition of area matters. I show the elevation & footprint of the island here roughly on the same scale: it is 1,100m from end to end. 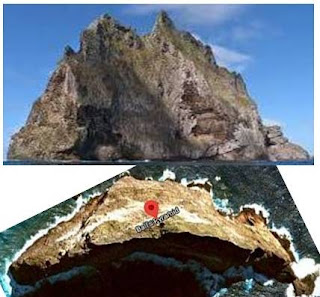 Looks like the elevation is at least 50% bigger than the maps.google.com footprint. But we can make a better fist of the ratio by making 1 hectare squares and superimposing them on the picture. Rules of engagement: if a region of the map is >50% of a hectare it adds a whole square to the count - if <50% then not. 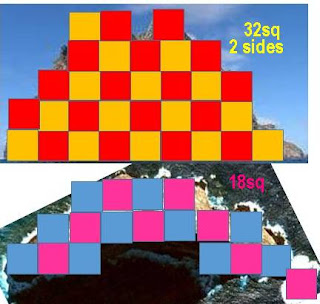 So give-or-take, the vertical area is about 3.5x [64 /18 ha] times greater than the horizontal area. That's a huge differential. In Matt Parker's video, the extreme case of Switzerland is a paltry 7% bigger when topography is included in the model; so it leap-frogs flatties Denmark and Nederland in the country-size rankings. I'm a little bit doubtful about my calcs, therefore. But try them out on your mates next year when we're allowed back in pubs.
More island tales? Island Index
Posted by BobTheScientist at 07:13