You can do it too 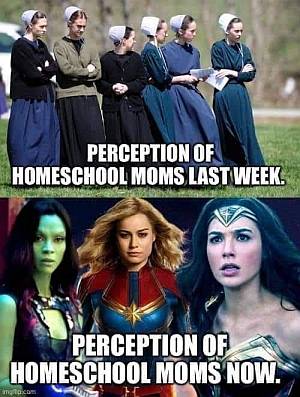 At the scut end of the last century we became founder members of HEN the Home Education Network. As the onlie begetters of two adults who have each a backbone, compassion and a sense of purpose we had to develop some sort of educational philosophy. It transpired that the best thing we could do to navigate the growth and development of two insatiably curious girls was to shut up and get out of the way. Home Education, like any movement that attracts fervent believers, can get schismatic. HEN was founded by tree-huggin', Birkenstock-wearin', ricecake-eatin' lefties so many of us were on the unschooling end of the spectrum. But HEN became a broad church and some of us were from the religious right. Believing that women are incubators tended to go with the kids having lessons round the kitchen table and even a timetable, lesson-plans and curriculum. It was rumoured that some of these families had a school-bell to announce break-time (and presumably prayer-time). And, I kid you not, there was [is?] even a group that went by The St Martin de Porres Home-School Apostolate. Outsiders - normals - who sent their kids off to school every weekday morning, could be quite judgmental. No idea what they said behind our backs but to the face it was often one of two tropes.
The 'too much for me' belief / expectation is based on parents' own experience of school: 30 kids of the same age but widely different ability being taught by a single adult. A lot of the practice of teaching is managing the logistics of this, frankly weird, arrangement. The maths says that each child will get, on average [150m ÷ 30], 10 minutes of individual attention in a 5 hour teaching day. Your child, who is a bit above average, will get rather less because the tails of the distribution (Johnnie Runamuck & Dolores Harvardbound) will require more of the teacher's attention.  This is why learning to read is so important in school - that middle tranche of the class needs to be told "get out the book and do the exercises on page.17".

Home education, unless you're really old-style no-contraception breeders, is going to involve only 2-3 kids. Physical distancing should be keeping their pals the other side of the kitchen window. You'll soon find that, under the age of 16, when the dreaded Leaving Certificate exams start to acquire legs, it makes no difference whatsoever what goes down at the kitchen table.
The kids don't need the rest. One of our first generation HENnies went to school at the age of 16. She settled into the two year Leaving Certificate cycle as to the manner born, and went on to read German at UCD. At the end of her 1st year in college, HEN was invited to a Dáil tribunal on Home Education. Somebody had the inspired idea of inviting young Siobhán to be part of our team. In response to a dorky question about the school curriculum from one of the TDs, Siobhán looked candidly across the table and said "The maths was the hardest aspect of starting school at 16, it took me six weeks to catch up". All those lessons, all that homework, all those quizzes and tests were really just 10-years of time-filler. Grand if you like it, unchallenging if you had a true mathy mind, hateful drudgery for the innumerate; especially if taught by someone at the edge of their math-competence.

Advice on unexpected home education: make it fun, make it diverse, keep the sessions short, don't mind the curriculum, give the kids as much agency as you can handle. Don't expect them to manage the transition any better than you. Good luck. We raised two girls on cooking, reading and gardening (and little enough of that). They grew up straight upright and normal-range tall. Your kids can pick up The Calculus, the cranial nerves of a dog-fish, and the role of the supernatural in Hamlet if and when they need it.
Posted by BobTheScientist at 07:22