Map of the Nation

Ever wondered what the circumference of the world is?  It's 40,000km to the nearest couple of miles.  And that's not a coincidence - it's a definition.  In the turmoil after their revolution, the French Academy of Science decided to put manners on us all by replacing yards, cubits and Flemish ells with a single universal measure of length, which they chose to define a the 10,000,000th part of the distance between the North Pole and the equator.  It took the designated engineers Mechain and Delambre the best part of seven years to triangulate between Dunkerque and Barcelona and extrapolate the distance to make the calculations. With the best science of the day, they made some assumptions about the shape of the earth which meant that their official meter is out by 200 micrometers (about the width of the dot on this i).  Tsk!

At about the same time, the British Government decided it would be a sound idea to make accurate maps of the South coastal counties of England, so that if the revolutionaries decided to swarm across the channel in a waft of garlic, the local militia could get to invasion beaches in the shortest possible time.  And out of this, the project to map the whole country was born.  It also explains why the mapping was carried out by a branch of the army.

All this is amply explained by the wonderful Map of the Nation: a biography of the Ordnance Survey by Rachel Hewitt, which was given to me by El Asturiano as I left Dublin at the end of 2012 to start work at The Institute.  It's taken me nearly six months to finish it partly because I've been somewhat busy, but mostly because the font is miserly small and unaccountably hard to read.  But it's worth it for the introduction to the technology and hardship of cartography in the olde days when you had to get out in the rain with your Gunter's chain and theodolite and hope that the gales wouldn't carry away your sail-canvas tent in the night.  The Ordnance Survey started in the South of England (Sheet 1, Kent 1801), and it took them two generations to work their way North and West to knock off Sheet 108 Denbigh in 1870 and cover the whole island.  It is one of the peculiarities of history that Ireland got served first and the Other Island was fully surveyed by 1845.  Which is handy because we thus have an accurate record of what the country looked like when it supported 8 million people before the famine. For example, the field you must walk through to see The Ringstone is called Crowe's and if you look at the 1840 map you can see a black square at the bohereen end of the field.  That was presumably the cabin where Mr and Mrs Crowe and their (numerous?) progeny lived. 5 years ago when we dug up part of the field to plant trees we unearthed lots of broken china at that spot on the map. 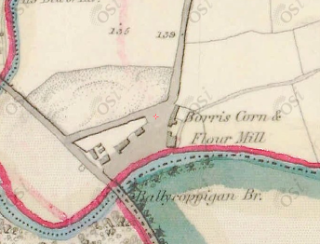 After independence, Ordnance Survey Ireland continued to work away in Phoenix Park and they have released an amazing zoomable historical map resource which allows you view the original 1825-1845 survey, the update 50 years later, and a sample of modern satellite pictures which you can over-lay.  I've picked the two views of Borris Co Carlow on the left because they show the rise and fall of the railway in Ireland.  In 1840 (in colour) the South of the village was barely populated, but the advent of the the railway changed 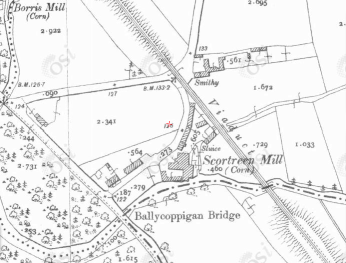 Rachel Hewitt's book is the offspring of her PhD thesis and a trove of data and history and vignette and technology.  William Wordsworth and William Rowan Hamilton both feature prominently in the Irish part of the tale. Read it to find out why you need two 20-foot-long glass rods if you want to start mapping a nation.
Posted by BobTheScientist at 19:37