Isabella & the Pot of Basil
[I did DecamerOne last week, and we're still locked up by this plaguey virus]
In Messina there dwelt three yong men, Brethren, and Merchants by their common profession, who becoming very rich by the death of theyr Father, lived in very good fame and repute. Their Father was of San Gemignano, and they had a Sister named Isabella, young, beautifull, and well conditioned; who, upon some occasion, as yet remained unmaried. A proper youth, being a Gentleman borne in Pisa, and named Lorenzo, as a trusty factor or servant, had the managing of the Brethrens businesse and affaires. This Lorenzo being of comely personage, affable, and excellent in his behaviour, grew so gracious in the eyes of Isabella, that shee affoorded him many very respective lookes, yea, kindnesses of no common quality. Which Lorenzo taking notice of, and observing by degrees from time to time, gave over all other beauties in the Citie, which might allure any affection from him, and only fixed his heart on her, so that their love grew to a mutuall embracing, both equally respecting one another, and entertaining kindnesses, as occasion gave leave.

Long time continued this amorous league of love, yet not so cunningly concealed, but at the length, the secret meeting of Lorenzo and Isabella, to ease their poore soules of Loves oppressions, was discovered by the eldest of the Brethren, unknowne to them who were thus betrayed. He being a man of great discretion, although this sight was highly displeasing to him: yet notwithstanding, he kept it to himselfe till the next morning, labouring his braine what might best be done in so urgent a case. When day was come, he resorted to his other brethren, and told them what he had seene in the time past, betweene their sister and Lorenzo.

Many deliberations passed on in this case; but after all, thus they concluded together, to let it proceede on with patient supportance, that no scandall might ensue to them, or their Sister, no evill acte being (as yet) committed. And seeming, as if they knew not of their love, had a wary eye still upon her secret walkes, awaiting for some convenient time, when without their owne prejudice, or Isabellaes knowledge, they might safely breake off this their stolne love, which was altogether against their liking. So, shewing no worse countenance to Lorenzo, then formerly they had done, but imploying and conversing with him in kinde manner; it fortuned, that riding (all three) to recreate themselves out of the Cittie, they tooke Lorenzo in their company, and when they were come to a solitarie place, such as best suited with their vile purpose: they ran sodainly upon Lorenzo, slew him, & afterward enterred his body, where hardly it could be discovered by any one. Then they returned backe to Messina, & gave it forth (as a credible report) that they had sent him abroad about their affaires, as formerly they were wont to do: which every one verily beleeved, because they knew no reason why they should conceite any otherwise.

Isabella, living in expectation of his returne, and perceiving his stay to her was so offensively long: made many demands to her Brethren, into what parts they had sent him, that his tarrying was so quite from all wonted course. Such was her importunate speeches to them, that they taking it very discontentedly, one of them returned her this frowning answer. What is your meaning Sister, by so many questionings after Lorenzo? What urgent affaires have you with him, that makes you so impatient upon his absence? If heereafter you make any more demands for him, we shall shape you such a reply, as will bee but little to your liking. At these harsh words, Isabella fell into abundance of teares, where-among she mingled many sighes and groanes, such as were able to overthrow a far stronger constitution: so that, being full of feare and dismay, yet no way distrusting her brethrens cruell deede; shee durst not question any more after him.

In the silence of darke night, as she lay afflicted in her bed, oftentimes would she call for Lorenzo, entreating his speedy returning to her: And then againe, as if he had bene present with her, shee checkt and reproved him for his so long absence. One night amongst the rest, she being growen almost hopelesse, of ever seeing him againe, having a long while wept and greevously lamented; her senses and faculties utterly spent and tired, that she could not utter any more complaints, she fell into a trance or sleepe; and dreamed, that the ghost of Lorenzo appeared unto her, in torne and unbefitting garments, his lookes pale, meager, and staring: and (as she thought) thus spake to her. My deare love Isabella, thou doest nothing but torment thy selfe, with calling on me, accusing me for overlong tarrying from thee: I am come therefore to let thee know, that thou canst not enjoy my company any more, because the very same day when last thou sawest me, thy brethren most bloodily murthered me. And acquainting her with the place where they had buried his mangled body: hee strictly charged her, not to call him at any time afterward, and so vanished away.

The yong Damosell awaking, and giving some credite to her Vision, sighed and wept exceedingly; and after she was risen in the morning, not daring to say any thing to her brethren, she resolutely determined, to go see the place formerly appointed her, onely to make triall, if that which she seemed to see in her sleepe, should carry any likely-hood of truth. Having obtained favour of her brethren, to ride a dayes journey from the City, in company of her trusty Nurse, who long time had attended on her in the house, and knew the secret passages of her love: they rode directly to the designed place, which being covered with some store of dried leaves, and more deeply sunke then any other part of the ground thereabout, they digged not farre, but they found the body of murthered Lorenzo, as yet very little corrupted or impaired, and then perceived the truth of her vision. 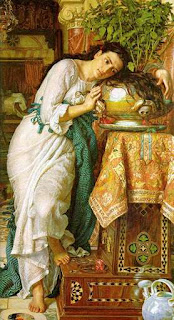 Wisedome and government so much prevailed with her, as to instruct her soule, that her teares spent there, were meerely fruitlesse and in vaine, neither did the time require any long tarrying there. Gladly would shee have carried the whole body with her, secretly to bestow honourable enterment on it, but it exceeded the compasse of her ability. Wherefore, in regard she could not have all, yet she would be possessed of a part, & having brought a keene razor with her, by helpe of the Nurse, shee divided the head from the body, and wrapped it up in a Napkin, which the nurse conveyed into her lap, and then laide the body in the ground again. Thus being undiscovered by any, they departed thence, and arrived at home in convenient time, where being alone by themselves in the Chamber: she washed the head over and over with her teares, and bestowed infinite kisses thereon.

Not long after, the Nurse having brought her a large earthen potte, such as wee use to set Basile, Marjerom, Flowers, or other sweet hearbes in, and shrouding the head in a silken Scarfe, put it into the pot, covering it with earth, and planting divers rootes of excellent Basile therein, which she never watered, but either with her teares, Rose water, or water distilled from the Flowers of Oranges. This pot she used continually to sitte by, either in her chamber, or any where elsee: for she caried it alwaies with her, sighing and breathing foorth sad complaints thereto, even as if they had beene uttered to her Lorenzo, and day by day this was her continuall exercise, to the no meane admiration of her bretheren, and many other friends that beheld her.

So long she held on in this mourning manner, that, what by the continuall watering of the Basile, and putrifaction of the head, so buried in the pot of earth; it grew very flourishing, and most odorifferous to such as scented it, so that as no other Basile could possibly yeeld so sweet a savour. The neighbours noting this behaviour in her, observing the long continuance thereof, how much her bright beauty was defaced, and the eyes sunke into her head by incessant weeping, made many kinde and friendly motions, to understand the reason of her so violent oppressions; but could not by any meanes prevaile with her, or win any discovery by her Nurse, so faithfull was she in secrecie to her. Her brethren also waxed wearie of this carriage in her; and having very often reproved her for it, without any other alteration in her: at length, they closely stole away the potte of Basile from her, for which she made infinite wofull lamentations, earnestly entreating to have it restored againe, avouching that shee could not live without it.

Perceiving that she could not have the pot againe, she fell into an extreame sicknesse, occasioned onely by her ceaselesse weeping: and never urged she to have any thing, but the restoring of her Basile pot. Her brethren grew greatly amazed thereat, because shee never called for ought elsee beside; and thereupon were very desirous to ransacke the pot to the very bottome. Having emptied out all the earth, they found the Scarfe of silke, wherein the head of Lorenzo was wrapped; which was (as yet) not so much consumed, but by the lockes of haire, they knew it to be Lorenzoes head, whereat they became confounded with amazement.

Fearing least their offence might come to open publication, they buried it very secretly; and, before any could take notice thereof, they departed from Messina, and went to dwell in Naples. Isabella crying & calling still for her pot of Basile, being unable to give over mourning, dyed within a few dayes after. Thus have you heard the hard fate of poore Lorenzo and his Isabella. Within no long while after, when this accident came to be publikely knowne, an excellent ditty was composed thereof, beginning thus:

Cruell and unkinde was the Christian,
That robd me of my Basiles blisse, &c.
The painting is by William Holman Hunt
The poem by John Keats