I don't have green fingers; I'm not a natural gardener. I only engage with the process at all at all for the sense of getting something for nothing . . . nothing except blackened finger-nails, wet knees and a sore back. This is why ramsons Allium ursinum are such a blessing - because they come up every year without an effort on my part and let the same be said, later in the year, for blackberries Rubus fruticosus. Most years, by the time I start thinking about plantings, it is well late into Spring and it looks like the growing season will close out before any tomatoes turn red. This year we are earlier than some others, and I got beans and peas and chard seed Beta vulgaris into wee-pots before Easter. All this planting, especially setting things out in the final destination pots, requires a lot of soil / compost which is not too lumpy. Accordingly, as last year, I spent a few productive upper-body hours last week, turning the compost bins over with a long-handled shovel and filling a few 8½ feed/fertiliser sacks with the thrice shifted end-product.

That's a our compost corner [above] and if any of you Protestants think it looks like a ragged-arsed mess, then this Protestant agrees with you. But not enough, clearly, to have set things up differently. Indeed, although the dividing walls are tidy enough concrete blocks, the front-gates and roofs are a godawful rattle of pallets, plastic election posters [Go Greens!], old cast-iron guttering, gates and a bedstead. If it was tidier, I'd be more inclined to engage with the composting and that in itself would generate more tidiness. At the top of the slope are the 1 2 3 kitchen/domestic bins and at right-angles are the A1 A2 A3 annual bins which take the more noxious crap - thistles, dandelions, couch grass - in the pious hope that 3 years of microbial activity will kill them. About a month ago The Beloved bought some fancy seed potatoes which have been chitting in the back-porch. They'd better get in the ground soon, or I'll eat 'em. Accordingly TB  started to clear a square of ground that once-had-been a spud-bed but had been fallowed for several years and was now a sleeping-beauty of brambles and nettles. Cleaning that generated a whole hape of 'dirt': dockens, dandelions, buttercups and rank grasses which meant I had to turn the dreaded annual bins to make room for this year's weeds. 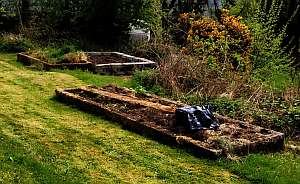 Chop chop shovel shovel. The problem with unturned compost bins (I couldn't face it last year) is that the local ash tree roots penetrate from the bottom and a) suck all the good out of the brew b) make it hard to drive a shovel in - hence the chop chop. What you see centre stage in the picture above is 15 feed-sacks of reasonable quality compost which I used to top dress and square out the "new" potato bed [with grey surround of fresh concrete blocks in picture R]. That is almost exactly a N=44 bale of blocks which weighs a tonne - all dragged across the grass on a sack-truck. The contents of an annual compost bin, after losing a some weight to the microbial fermentation, weights a little more than half a tonne. Bit by bit, bag by bag, I've shifted at least 3 tonnes of stuff from one place to another. The other beds visible in the picture were mulched with straw and wood-chips ?last-year? which was totally grown through with dockens, dandelions, buttercups etc. But actually (I believe because of the mulching) it was quite easily cleaned: just generating another generous barrowful of thatch and roots for the annual compost bin.

Now that's all the background. The point I want to make is that the rake is an amazing tool for removing weeds. Gardeners know this and have long since ceased to reflect upon the fact. Non-gardeners won't care. Struggle-gardeners like myself get better and better at making the tool sing, or at least zinnng through a flower-bed or seed-bed. The deft final twist that throws the weeds together and leaves the good earth in place - wonderful. But without our hands there would never be any gardeners - you cannot garden with hooves: damned hard to hold a rake for starters. The down on the knees gardening that you need to do at some stage really needs those fingers to separate the wheat from the chaff weeds from the good stuff. Again, there is a deft wiggle and shake that gets a good
handful for the bad weed-bucket.

One final thing about gardening and handwashing - don't! Even with gloves your hands take a pounding when gardening. They are designed by about 10 million years of evolution to work, and work hard, grubbing and rubbing, pushing and shoving; grasping and pinching. Young apes, humans included, have remarkable powers of regeneration in the skin of the hands. Didn't need, or get, soap or detergent; yet a good night's sleep and the hands were ready for the fray the next day. They have a natural protective lube . . . which along with everything else as we age, dries out and becomes less fit for function. Soap and, heaven forbid, hand-cream screws up the homeostatic feedback loop that keeps the the palms and finger pads protected. In short order nothing works without hand-cream and the share-holders at Johnson & Johnson spring happy capers all the way to the bank. If you get sick from eating your dinner with earth-dirty hands, I will eat my words [pizza] hat.
Posted by BobTheScientist at 07:18