Up and down the Blackstairs, as part of the covid-lockdown we have been requested and required to not set the uplands on fire at this time. But some fuckwits hill-farmers persist in exercising their Rights of Ancient Days to burn off the thatch and promote the growth of fresh green shoots for their sheep to graze. A series of incidents made the news last week in Wicklow [400 hectares in one case] because it needed a helicopter to dump water on the blaze to bring it under control. We've had one spill of rain here since the shut-in started a month+ ago which makes it a grand bone-dry time to walk in the hills - although nobody is allowed to. In Ireland you may only burn uncultivated land for six months - 1st Sep to 28 Feb - each year. tbh, I have as little - or as much - care about the wildlife and property destruction in Wicklow as I do about ditto in Australia this past January. But on Thursday night, the arsonists got rather more up close and personal with Castle Bob. As I was composing myself for bed at 2215 I looked out into the darkened yard - in case zombies - and was confronted with 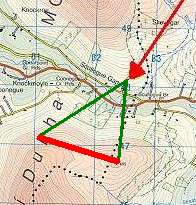 on the hill of Cullentra on the other side of our valley. Which was a bit concerning because one of our kindest and most civilised neighbours lives at the very edge of the forest underneath that same ridge. Such a blaze looks like nothing at all on a camera; it's like the spectacular full moon subtends a half-a-degree angle on your retina so looks utterlty inconsequential when you snap it with your smartphone. Hold a c€nt [remember them?] at arm's length: that's how big the moon is. But Bob's the Scientist! he can triangulate to estimate the extent of the picture I captured at 2240 that night. I stood back in the bedroom upstairs at home until the window framed the flames and could thereby calculate the angle subtended. The 16-04-20 Cullentra blaze is 1500m long! Our farmer's meitheal has been put on high alert because if our hill gets any significant fire-damage we'll lose our hand-out for doing the right thing by the ecosystem.

There's a 42 page Code of Practice produced by the Dept Agriculture which summarises the legislation on the matter
Few enough of the farmers I know went to college and several of them left school at 14, so a 42 page Code of Practice is not something they'd happily read with care and attention. Any more than they'd read the instructions that came with their chain-saw or PTO at the back of their new tractor. Farmers I know are amazing for getting things done rather than, like me, piffling around thinking of the most efficient way of doing it. But really, the names of the laws and regulations gives an executive summary of the issues. As well as the farmers' right to burn the heather to get a better living from their hills . . .
The Blob-title is a conscious hat-tip to Colm Tóibín's brilliant novel The Heather Blazing. That is a history of this our bold republic illuminated by the life of a fictional Enniscorthy man who makes good as he grows up with and within the state. Enniscorthy is where Tóibín was born and where we do our shopping, but the book, its loves and losses is bigger than local. You must order it up as soon as the library service resumes.
Posted by BobTheScientist at 07:41