Last September I urged you to read an essay about the singer James Blunt's previous life as Captain J. H. Blount a tanker serving with the NATO peace-keeping force in Kosovo. It could be argued that his considered inactions and those of his CO Gen Mike Jackson at Priština International Airport in June 1999 saved thousands of lives in the bloody internecine conflict. That story was interesting to me because it threw a light on the working life of my father who accumulated 35 years of service in the British Navy. Soldiering is not usually about killing people so much as making the other chaps give way.  Blo[u]nt's father was also a soldier, indeed the whole family has been contributing martial service for hundreds of years. 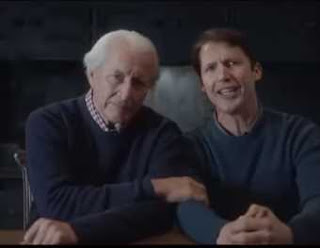 Last year launched a song Monsters about his ailing father whose one remaining kidney was about to fail. One remaining? Because the old chap had donated his other kidney to someone whose need was greater than his "I've got a spare, work away" - the sort of sang-froid for which British soldiers including my collateral relative and namesake LtCol Thomas Scientist are known. You want to be careful watching that video even if you haven't lost your Dad. It's a video, it is directed, soundtracked and choreographed to find chinks in your emotional armour but it's okay to cry. I think there is a truth in the really understated affection of the father - whom I really hope is not a silver-haired jobbing actor. But maybe that is just me over-empathising about my own pater-filial relationship; which wasn't, shall we say, huggy. The only time I wept for my own Dad and the loss of years was when I picked up The Boy from the station for the funeral and he put his hand on my arm. Each generation we get a little less stiff in our approach to affect. Blunt has also written The Greatest down the generations to his children.

There's a lot of original material on Youtube - far more than you could ever watch even with a bank of screens running in parallel. There is also a curious genre of people-of-their-bedroom watching The Talent and recording their own reactions on film. There must be recursion out there: someone recording their reactions to someone recording their reactions to someone . . . there's an English bloke called Woody who makes such videos. Woody, poor chap, is completely unmanned by Monsters and none the worse for all that. There's a lesson in there for all of us as we pass through these Months in  a Time of Covid - no matter how grief-struck you are [and, friends, there will be grief] . . . try to keep your hands off your face.

More?: Adam Mishan is a voice coach who has his own channel and better hand-face discipline but he can't stop a tear or two coursing down his cheek.
Posted by BobTheScientist at 07:51