Film-buffs and horsoholics may believe there is only one Trigger: the "Four-legged Friend" of Roy Rogers, but triggers feature prominently in the world of immunology and cancer.  Humans, and mammals in general, are so robustly healthy most of the time because of redundancy built into the immune system - if one ploy fails to block a pathogen, then another is waiting in the wings. But sometimes the immune system is too clever by 'arf and over-reacts.  Then you develop an autoimmune disease as the mechanisms used to attack 'foreign' cells suddenly turn on cells that have up to now been recognised as 'self'.  Clearly this doesn't happen every day or we'd ALL have lupus (SLE), rheumatoid arthritis, type I diabetes, or Sjögren's syndrome.  Whereas lupus is only really common in alternate episodes in boxed-sets of House.  One way of explaining the incidence of these troubling conditions is that you have a genetic predisposition like DQ0602 which I mentioned yesterday, and you're okay for years and then some environmental challenge jumps the immune system off the rails. You get a flush of the runs after ingesting Campylobacter jejuni from a dodgy chicken pie and your immune system mops it all up over 3-4 days. Guillain–Barré syndrome occurs because a few days later your immune system, all hyped up and spoiling for a fight, occasionally recognises or imagines a structural similarity between something on the outside Campylobacter and something on the outside of peripheral nerves. The nerve damage may take years to recover if it ever does.  It's Lombard Street to a china orange that something similar is involved in multiple sclerosis (MS), but we haven't identified the trigger there (the smart money is on a virus). 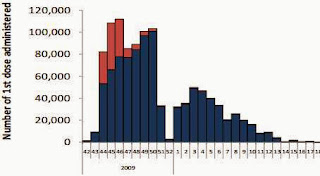 Yer takes yer chances in the rough old world of infection and immunity; sometimes you get a bad break.  But now you can choose to stack the odds in your favour in this desperate lottery by getting immunised. About 1 million people played this card in Ireland (22.5% of the population of the Republic) to avoid getting the H1N1 'flu that was certain-sure going to go pandemic in the winter of 2009-2010. They were injected with a vaccine called Pandemrix. You can see from the graphic that the urgency of the programme abruptly went off the boil for the last week of 2009, where protection from a life threatening illness took second place to having a Christmas knees-up (most of us) or lie-down (the poor overworked health-care professionals).  Some of those million immunized people may have therefore not gotten 'flu, not spent days in bed or in hospital, not died.  So that's clearly a good thing.

But in the relevant period 32 people started showing symptoms of narcolepsy.  You really wouldn't expect so many cases of this rather rare condition to blip up the HSE statistics in such a short time.  So Darina O'Flanagan and her colleagues at the Health Protection Surveillance Centre (HPSC - our equivalent of the CDC in Atlanta) carried out a retrospective study to see who had recently come into narcolepsy and whether they had been 'flu jabbed (N=30) or not had the jab (N=2).   In young people aged 5-19 the risk of narcolepsy was, from these figures, calculated at 5.7 per 100,000 person-years for vaccinated vs 0.4 per 100,000 person-years for unvaccinated: 14x more likely to get this condition if you have the jab.  But still extremely unlikely to get the condition.  81 cases of narcolepsy were revealed when notes were compared with Sweden and 79 cases when Finnish data was considered: the odds up North were similar to those in Ireland.

The vaccine Pandemrix was invented by GlaxoSmithKline GSK and patented in 2006, it consisted of an antigen from an H1N1 strain of influenza virus, an 'adjuvant' called AS03 and some preservatives. Adjuvants are often added to vaccines to goad the immune system into a response: inorganic alum (aluminium sulphate) has been used for decades for this purpose.  It looks like the immune system of the vanishingly small fraction of youngsters, who had the jab AND THEN developed narcolepsy, goes on the rampage and attacks the part of the brain that produces orexin.  Presumably they are DQ0602 positive  for starters.

These unfortunate narcoleptics were in the news last week because an apparatchik (аппара́тчик) from the megalithic Health Service Executive HSE (of which HSPC is part) issued a diktat to say that these affected narcoleptics couldn't have their legal costs (of their suit against the state) covered by the state . . . and he was promptly over-ruled by the head of the HSE: probably because The Boss recognised a public-relations disaster when it jumped up and bit him.

Who to blame? There are plenty of lawyers who will, for a cut, offer to sue the State, the HSE, the Department of Health, and GlaxoSmithKlline and Uncle Tom Cobbley to vindicate the rights of these people and indemnify them for the results of their mis-call in the matter of whether to have the jab or take their chances with the 'flu. Do I hear you cry "moral hazard" you uncaring brute? The cases are so rare that they would be impossible to pick up in any reasonably sized epidemiological study carried out by GSK before they released the vaccine to the public.  And here's another thing: there is evidence from China to suggest that, regardless of vaccines and GSK, by contracting a dose of H1N1 flu you are more likely to get narcolepsy.  Whom do you sue then?  Set your lawyers Dewey, Cheatem & Howe on Clotho, Lachesis and Atropos?


Posted by BobTheScientist at 06:45