In Ireland they are called the Gardai Síochána, the guardians of the peace. There is a strong tradition of an unarmed policy force in these islands. In general practice, neither the Police in the UK, nor the Gardai over here, carry guns. Since The Troubles and more since 9/11, some members of of these police forces are 'tooled up' and trained to shoot straight and taught when it is appropriate to pull the trigger.  The is not denying that more guns are in circulation in Ireland than there were 20 years ago. You can't buy an AK-47 anywhere legal here but guns can be bought if you know where to ask. One of the consequences of controlling the availability of guns and ammo, is that in Europe we don't have a mass-shooting every week . . . or even every decade.  That's a good thing.

Even without guns, there are enough bad hats, crazies and people under the influence and when the Gardai go in mano a mano they need to have some sort of leverage to give them, and law enforcement, an advantage. Right back at the foundation of the British police, when all the islands in the Western European Archipelgo, the lads on the beat were given a truncheon, billy-club or night-stick to ward off an attack and maybe deliver a disabling blow to a perp not yet ready to be arrested. The design has developed over the last 150 years from a robust stick to a side-handle baton to a more whippy collapsible baton aka spring cosh which is small enough to fit in a pocket but extends to 50cm long with a heavy button on the business end. It makes a whooshy sound when waved vigorously which is said of be intimidating. Original standard operating procedure SOP for the truncheon was to bring it down sharply on the head to induce concussion. But we have 150 years of strikes from which the strikee never got up, not to mention a whole science of contact sport encephalopathy in rugger and boxing. As the baton has developed to be more subtly fit-for-purpose, so has its use. Now officers are trained to give the perp a targetted whack on the common peroneal nerve at mid-thigh or the equivalent on the upper arm. It's the nerve-jangling pain which is disabling.

As we know from the USA and their peculiar fascination with fire-arms, there are other ways of disabling potential or actual peace-breakers. With a gun in your hard you don't need to get up close and personal with the other chap. Whatever about a tonk from a night-stick, taking a .38 bullet can cause devastating injury too often resulting in death. You want to be careful what you wish for in some jurisdictions: if you call 911 to report that your husband is having one of his psychotic turns in the garden you could get into "I said to take care of him; not Take Care of Him" situation. Holy St Bridget and All the Saints, we don't want the lads in blue to have guns; no matter how well trained they are. It's a risk assessment issue: the likelihood of a fatal shooting by an armed police force may be low but the severity of that adverse event is very great. 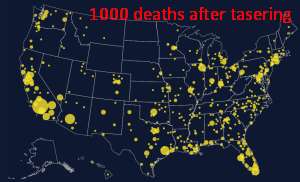 For the last 20 years we've had a Middle Way, which has the advantages of a gun (action at a distance) and the advantages of baton (not fatal injury): it's called a Taser and something like a million of them have been sold by Axon who seem to have cornered the market.  Reuters have put together a huge journalistic investigation of the claims by Axon that Tasers are entirely non-lethal.
Axon claims that their devices have been 'field-tested' / deployed more than 3 million times. Reuters have combed the court records back 15 years of  the 21stC to find 1,000 cases where a suspect finished up dead [R source] after being tasered. But of these only 150 had 'taser' as the main cause of death in the autopsy reports.  A chunk of the rest were head injuries sustained as the subject went down and stuck the head off the side-walk or a fire-hydrant. My reading of the Reuters analysis is that if you have a heart condition andif you are tasered in the chest then its much more likely to be fatal. If the taser is used properly to give you a disabling neuro-muscular jolt (in the arm or thigh, say) as current best practice suggests for a baton-whack then your long-term damage is even-steven. The cost is very different: a X26P law enforcement Taser is more than $1,000 whereas I can get a nice stout ash Fraxinus excelsior plant from any convenient hedge. Police officers who have volunteered to be tasered in the interest of science have described it as a whole body charley horse.

Please contrast this with The Counted, the Guardian database of the 1,000 cases every year where United States Citizens have been killed by law enforcement officers - almost all of them by gunshot. Those 3 million deployments of Tasers kind of match the 1 million Kevlar bullet-proof vests that were sold during inventor Stephanie Kwolek's life time. And for my druthers, I think I'll take my chances with a taser than a gun . . . OR being whacked on the head with a night-stick.
Posted by BobTheScientist at 07:19