Years ago when we were students, The Beloved and I elected to hitch-hike from Dublin to Carraroe, County Galway on the other side of the country. We set off bright and early by catching a #66 bus to The Spa Hotel, Lucan the standard jumping off point for The West. We must have looked extraordinarily scruffy (could it have been my midi-length fur coat?) because by lunchtime we'd only made it as far as Athlone. And having walked a couple of miles out of town we didn't seem destined to make any further progress, because light was failing and nobody was stopping. MY solution to the what next dilemma, was to cross the road to a mom and pop grocery, buy a packet of soup and a plastic bucket; fill the latter with water and set off into the bog to find a sheltered spot to sleep. I must have seemed really confident because TB didn't demur with "that's a dumb-ass sort of plan, let's go back into town and find a B&B". Anyway we wandered down a grassy bohereen until the sound of traffic dimmed, lit a fire in the lee of a turf cutting and spread out sleeping bags. We had been going to visit a friend in Carraroe and I'd made two (2) lemon madeira cakes as house-gifts. I'd left them in their cake-tins for easy of transport. By removing the cake from one tin we had a pan to cook the soup in and obviously had cake for dessert. Miraculously for the Irish Midlands in Spring, it didn't rain that night, but it wasn't close to being warm either.  We might even have had hot tea in the morning. We got a lift back to Dublin in the afternoon. 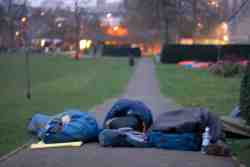 That's the kind of thing that you expect of young people, somewhat silly, mostly harmless and probably to be recommended. I thought of this on Friday night because,The Boy and Gdau.I were sleeping rough that night for the second year in a row in the Big Bath Sleepout 2018 [L for 2017] in support of Julian's House a charity for getting the homeless some care-and-attention. No tents allowed: just bin-bags, long-johns and a sleeping bag - ostensibly like a homeless person. Some of the participants are doing it as a fund-raiser. But for my money Consciousness Raising is as important as Raising Cash. If a night in the drizzle consolidates a sense of gratitude for her own bed, then it will be A Good Thing for G'dau's social capital. 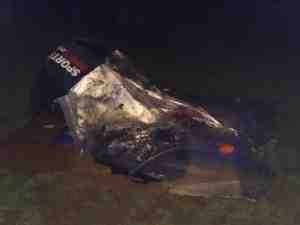 Here's a midnight report from My Son The Engineer.
I lay there listening to the rain, realising we had two problems: First, the umbrella was OK, tilted at 45deg on one edge and the handle but the wind could change and blow a fine wet mist over us. Second, the plastic sheet was going to make us very wet from condensation. I started lifting the sheet and then hit the idea of making a mini-fete tent by pulling the sheet up onto the umbrella, but I knew it wouldn't stay there. It felt like all I needed was a safety pin, or five, to keep the two together. I thought about what we had: an apple, an orange, spare socks, tent pegs. Nothing that would do it. I kept putting the plastic up onto the umbrella and thinking. I considered asking some passers-by to find me safety pins. Then I realised that if I had pegged the plastic looser then I might be able to pull the plastic right over and impale it on the umbrella spike. I tried to pull the plastic over but it was at least 50cm too short and I doubted one hole would take the tension of the stretch and wind anyway.
I lay there 15 mins and began to think about the solution itself. Even if I could fix the sheet over the umbrella then the rain would run on the umbrella and under the plastic sheet anyway. I could feel this already happening in places. This sparked the thought that I was going about it the wrong way; I should try and put the sheet under the umbrella. I realised that I could stick sections of the plastic between the ribs and the umbrella fabric. This was too loose but then I found that each rib is actually made of two thin half-tubes of metal and that I could squeeze the plastic between them, which had pretty good tension. I tried and tried but the sheet kept slipping out so I lay back and thought about what I could use. I hadn't really begun to consider the tent pegs when I remembered I had five or six coins from when we had bought the hot chocolate. If I pushed a coin through within the plastic then it would act like a button and stop the plastic from coming out. I did this between five ribs and now we have a nice tapered cylinder bivouac.
And wouldn't you know it? Just as I'd finished doing this the rain stopped.

That m'boy! It reminds me of a similar jimmy-up that saved my life from mosquitos in Portugal.
Posted by BobTheScientist at 08:36