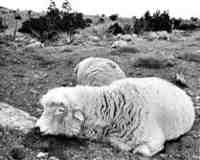 Ancient Roman citizens used to leave the party with an ave atque vale = hail and farewell. By contrast, Roman gladiators used to begin there party with Ave, Imperator, morituri te salutant = hail emperor, those about to die salute you. 6,000 sheep from Utah started off St Patrick's Day 1968 with little thought that without vale farewell they were morituri about to die . . . but they were. About 2/3 of them dying [R for sample] from inanition and internal haemorrhage, the rest shot in the head by their human minders when it was clear they weren't going to get up.  It is exactly 50 years ago, that a phone call was made to the US Army Dugway Proving Ground, alerting them to the fact of wide-spread sheep death in Skull Valley about 30 miles NE of their Top Secret chemical and biological warfare CBW playground [warning sign below L] on the edge of the desert a couple of hours outside Salt Lake City. 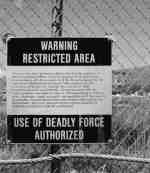 hmmmm? well it turned out that, on the 13th of March that year, there had been 3 separate experiments at Dugway on the distribution of what we now call weapons of mass destruction WMD, in particular a nerve agent called VX. VX is a denser, more viscous, relative of Sarin which has been used with such abandon in Syria.  Both VX and Sarin (and the Новичо́к Novichok stuff which took out Серге́й Ви́кторович Скрипаль and Юлия Сергеевич Скрипал in Salisbury a couple of weeks ago) are anti-cholinesterases. Cholinesterase is an enzyme [most biologics ending -ase are enzymes] is which breaks down the neurotransmitter acetylcholine ACh after it has been used by motor neurons to stimulate the muscles. Anti-cholinesterases stop the enzyme working, so the ACh continues to call for muscle contraction and you die all locked up in the agonising spasms of tetanic paralysis. Botox kills you with flabby paralysis because it prevents the release of ACh from the motor neuron.

Team Dugway seem to have done a controlled experiment by trying out three different methods of dispersal: they fired an artillery shell; they burned 600 lt in an open-air pit; they loaded a fighter-plane with two tanksful and sprayed it out over the countryside.  In all cases, they cut the lethal load with a red dye of similar density to make easier the post hoc detection. I wrote about using Serratia marcescens as a marker in another friendly-fire incident for CBW dispersal over San Francisco in 1950.  A low-ranking officer on the Army's PR team mistakenly released a confidential report to the press and public opinion quickly gelled into the certainty that the [poor] sheep had been killed in a carelessly conducted experiment by the US military. It became A Mighty Wind that blew fresh air through the establishment and changed government policy on CBW and probably directly saved thousands of Vietnamese people and their livestock from a fate worse than probably involving death. That loonngg essay A Mighty Wind is by Dr Steve J Allen of the right-wing independent investigative think-tank Capital Research Center. In a previous life Allen was a researcher for 1990s Speaker of the House Newt Gingrich [R, Georgia], but we won't hold that against his views on the Skull Valley Incident; which I find to be informed and informative about the history, chemistry, biology, ecology, epidemiology, politics, and press coverage of those times.

The 3 internally inconsistent issues that interest me are:
Here's what I think from my sofa, 50 years after the event. The US military had been lobbing toxins about the range in Utah for the best part of 20 years and 17 March 1968 was the first time that a lot of farm-stock had beencome ill in the vicinity. That's in the vicinity in the uniquely American way of people who will think nothing of driving 80km to have dinner or take in a movie. The 6,000 sheep died in two tranches 50km and 110km distant from the flight-path of the spraying jet-fighter, and 4 days after the last run of tests at Dugway. I suggest that flight and fatality were coincidental and that the sheep succumbed to a sheep-specific enterohaemorrhagic bacterial infection. That pathogen having been spread through both flocks of sheep, by exchange of stock in the days before in the attack became obvious. The farming corporations who owned the sheep got compensation from the Feds at about twice the market value of the stock. So they had a vested interest in allowing the press to put the blame on the military. The military, maybe paradoxically, in the realpolitik of the cold war liked the idea that their potency was in the public domain and hopefully putting the frighteners on the Soviets. As evidence of the credibility of my pathogenic insult explanation, remember that half the saiga antelopes Saiga tatarica of Central Asia died of Pasteurellosis in May 2015.