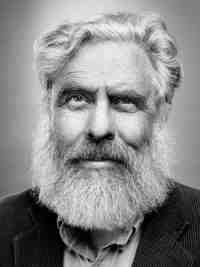 George Church has been getting some coverage recently after his interview at The Edge. He's a couple of months younger than me but has been absurdly more productive. 450 peer reviewed publications, 100+ patents, a best-selling geek book Regenesis and professorships at Harvard [homepage] and MIT. Does that count as double-jobbing? Do both august Cambridge, MA, institutions pony up a 6-figure salary? Where is his office? Then there are Directorships on five (5) research centres including the Wyss Institute for Synthetic Biology. The fact that he looks like the first mate of the Pequod [L] only adds to the romance. He owns being 'different' on a clatter of psycho-personal dimensions: dyslexia, ADD, narcolepsy, OCD but hasn't seen them as handicaps. If he couldn't read easily, he had to work harder to find ways of acquiring information. His progression was not meteoric because he acted like he wasn't aware of the rules much of the time. He flunked out of Grad School in Duke because he spent all his time in the lab doing experiments and so neglected the necessary course-work to progress through each year. Nobody doubted that he could do course-work: he ploughed through enough credits as an undergraduate to get a degree in both biology and chemistry in 2 years. His slogan "Float like a butterfly, work like a bee" encompasses the two aspects of his scientific life: a broad range of interests and a willingness to pull like a dog when he was on fire. This works when you're a grown up with tenure at Harvard [and MIT] but is a dodgier game-plan when you're young.

[Personal aside: I landed my marginal first degree at TCD because I spent days in the library across town in UCD trying to get to grips with inclusive fitness and evolution. EO Wilson's book Sociobiology was publish in 1975 when I was halfway through my under-graduate course and UCD's library had a far better range of journals than TCD. I was clever enough to read Hamilton's papers in J. Theoretical Biology on inclusive fitness and Trivers' on parent/offspring conflict, but too stupid to realise that none of it would contribute to the marks for my degree.]

Church was dumped out of Duke because he ignored the rules but applied to, and was accepted by, Harvard who cared less about the box-ticking. By that time he had 5 papers, including 1st author in PNAS, so was clearly an asset in a research-led department. He had the extraordinary, affirming, experience of sitting in a lecture on crystallography and having the lecturer citing one of those five papers! From then on his career was on the up and up. His PhD thesis work landed him a tenure-track professorship at Harvard and for the last 30 years he's been churning out ideas, developing technologies and writing an average of one paper a month.

I'll focus on just one Big Idea because it's a collaboration with Penny Chisholm [bloboprev] and because it might save the whole planet from meltdown. When Church heard about fabulous biomass of Prochlorococcus in the oceans, he contacted Chisholm for more information . . . and brought a sackful of ideas to the table to inform the discussion. The maths are simple: there are half a billion tonnes of Prochlorococcus floating about there photosynthesising like the sun won't rise tomorrow. Photosynthesis works by using photons and chlorophyll to convert CO2 into glucose and cellulose. That's sucking a greenhouse gas out of the atmosphere and fixing it as biomass. Each Prochlorococcus uses the glucose to copy its DNA and the surrounding material so that at the end of the day 2 Prochlorococcus float where there was but one before. Doubling everyday, in 3 weeks the mass of bacteria would equal the mass of the Earth and I haven't notice a huge balloon of green snot getting in the way of the sun, have you? Chisholm and Church quickly concluded that half of the net production must be dismembered and gobbled up by a whole community of dependent consumers.

A major player in this wholesale deconstruction of green proteins, minerals, DNA, lipids and carbohydrates must be viruses. Their modus operandi is to invade a Prochlorococcus [and everything else, including you], and subvert it's DNA replication machinery to make more virus. What if, mused Church, we could engineer bacteria so that its replication machinery was incompatible with that of the virus? He has since modified the genome of Escherichia coli so that all instances of one of the three stop codons [which signal: end of gene; find something else to translate into protein] have been replaced with another stop. The lab strain of E. coli seems to motor along nicely after this insult to its engineering. What that allows is to use that 'spare' stop codon to insert a different amino acid in key places in bacterial proteins. After that modification, and some more molecular jiggery-pokery, any incoming virus will be unable get a handle on the modified replication machinery and Prochlorococcus will be able to grow and divide without hinderance. Global warming solved! The fact that you'll be able to drive a 4x4 from New York to Paris over a mat of pea-soup can be seen as a bonus. The best way to have one good idea is to have a lot of ideas!
Posted by BobTheScientist at 07:18