We live 230m above sea-level, the last 30m of which requires a 300m journey up a 1:10 dirt track. I think, even given the worst-case prediction of sea-level rise driven by global warming, we'll be safe. The doomsday outcome if all the ice in Antarctica and Greenland melts is 70m increase of sea-level. Now that would be awkward, because we'd have nowhere to shop. Elevations: Bunclody 15m; Borris 44m; Enniscorthy 25m; New Ross 7m; Kilkenny 45m - they're all ploosh; on the other hand, I guess our management would expect me into work because The Institute 70m.

I was reflecting our Elevation because of an article in a recent Nature The Cruellest Seas: extreme floods will become more common as sea levels rise. It is ironic because the author Alexandra Witze is based in Denver Colorado 1600m about as far as you can get from the impact of sea level rise. The article is interesting as an example of why climate change is a more appropriate term than global warming. The 2018 Patrick's day weekend was the coldest mid-March we've had since 2007. That year I was part of the Dublin St Patrick's Day Parade in samba school and a handful of allllmost naked Brasileira dancers. At least we sambistas had white short sleeved shirts against a whipping East wind; but the girls had gone from a pleasing coffee-au-lait to a worrying shade of blue/grey by the time we'd swung along the route. Not every country is going to get warmer and not every coast is going to be increasingly at risk of flooding; as shown in two clips from the graphics: 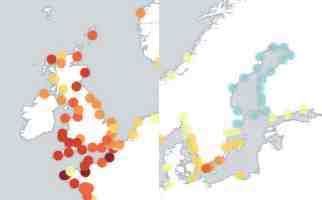 Bring on the global warming whenever you're ready! The effect of sea-level rise on the fate of cities depends, sure, on the rate of melting at the ice-caps; and also on the fortunes of timing of tides and weather. But it also depends on whether the coast itself is rising or falling. For the last 10,000 years the bulk of Scandinavia has been rising elastically as it recovers from the weight of ice accumulated during the last ice age. All the ports and cities round the Gulf of Bothnia from Turku/Åbo to Stockholm are marked blue in the map above because, by 2050 (!) their likelihood of a 100 year flood is receding to once every 1000+ years. Dieppe otoh or Brest is going to be getting "100 year floods" every 5 years.

It's not just Bangladesh that is going to be awash. A disconcerting number of the world's greatest cities started their growth as ports [London, Marseille, New York, San Francisco, Shanghai, Kolkata] ; many of the rest [Paris, Budapest, Memphis, Minneapolis, Hyderabad] were established at significant river crossings. Cities don't get big by acting as a local market for surplus grain, they grow because they corner the trade in non-essentials like silk, cloves, cuff-links, pork belly futures, Guinness.  In any case you should have a gander at Alexandra Witze's article because the prognosis of these great coastal cities [New York City futures anyone?] hinges critically on the past data you put in to the equations to predict the future and how you set the gears grinding on the algorithmic mill. Whatever the data, whatever the model, whatever the result; you can bet your sweet bippy that few governments are going to undertake the cost of future-proofing their real estate beyond the next election. That's because the actual cost of berms, dykes, surge-barriers, evacuation routes, building redesign (in absolute $£€ or as % of GDP) is frightening - there are a lot of people and a lot of real estate that will need remediation . . . or abandonment.
Posted by BobTheScientist at 07:33