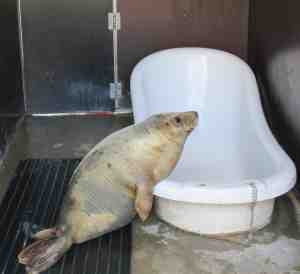 Last November, The Beloved had an awf'y big adventure sprung upon her when she was visiting with Dau.II in Cork. She volunteered to drive a couple of seals across the country and deliver them to Seal Rescue Ireland in Courtown. One of the beast was a big slob of teenager but the other was a small handful of orphan. Seal Rescue have a policy: when a seal weighs 35-40kg s/he is ready for the wide ocean blue; and Seal Rescue's task is to fatten up the seals to pass this threshold. Last week The Beloved got a call to say that Melisandre the tiny orphan was now At Weight; was to be launched on Sunday; and would we like to witness this rite of passage ? We would, and we did. 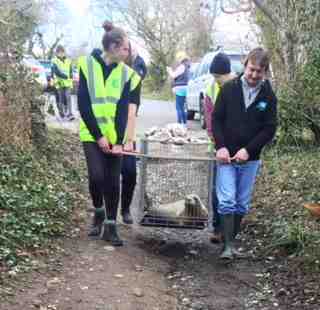 We got there, by invitation, about an hour early and were able to visit the centre and talk to the volunteers before driving a piece up the coast to a shingly Kiltennel Beach North of Courtown. It was interesting. There are two species of seals which wash up on Irish beaches: Phoca vitulina the  harbour seal or common seal and the larger, not common, grey seal Halichoerus grypus. The Rescue Centre is located behind the Adventure and Leisure Centre but has fewer water slides. Some . . . but it's less exciting than in the pay-in section. When we visited there were 30 seals present in various states of development and de-climatisation from human contact. Typically a baby seal will wash up, often storm battered, on a beach somewhere in Ireland. Small seals are fed milk, but they won't suck from a bottle so have to be intubated and delivered a stomach-full several times a day. The Help really have to get up close and personal to do this and are often nipped by the teeth. Somehow everyone needs to forget the close cross-species relationship and go each their separate ways. 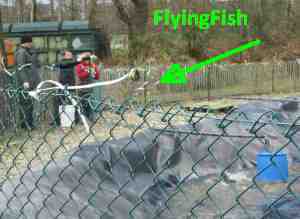 This social weaning starts as soon as they switch to solid food and, as I witnessed, this food is a bucket of herring Clupea harengus lobbed one-a-time over a fence. These herring come all the way from Donegal on the other side of the country and up until recently was a logistical nightmare. They couldn't be sure how many 'customers' might be on the premises and it was costing a fabulous amount in transport costs. More recently, a local industrialist donated them an industrial sized freezer and they take delivery of a couple of tonnes (!) of frozen herring in 20kg boxes. These have miscellaneous catch-dates which might be 18 or 24 months in the past. That has got to be beyond the sell-by for human consumption. Occasionally there will be a rogue cod Gadus morua or hake Merluccius merluccius; but the seals are fussy and will leave such offerings on the side of their plate. 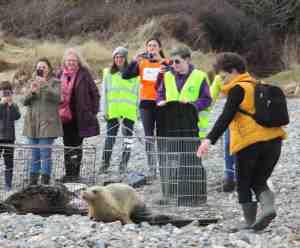 As the seals get ready for the off they are shifted to a pool surrounded by a sight-blocking fence in the hope that they will forget to associate free fish with kind humankind. On the Day of Departure they are crated up and loaded into the back of a Renault van [second pic above].  Having been portaged down to the beach, the public were invited to enter a €2-a-ticket chance to open the door to the transport crate. After a brief explanation from one of the Seal Volunteers, the doors were opened the the two seals lummocked along towards the sea. Melisandre seemed to be more bewildered, and slower out of the traps than her companion. 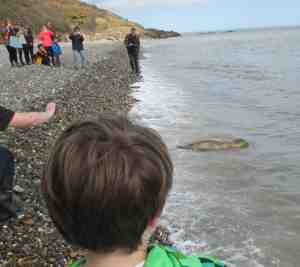 But eventually, she made it to the surf [L] and disappeared >!poof!< into a much wilder and harder world than she had experienced since the end of November. Instead of having 5kg of herring fly over the fence on a regular basis, young Mel will have to chase down herring which probably don't want to be eaten. A moments reflection will suggest that the reason their preferred herring supplier is from Donegal is that there are no herring to be had from the exploited seas off the Wexford coast. One of the volunteers told me about a young seal that wasn't thriving but after a few days voided a mass of feathers and felt (and looked) much better after that. So harbour seals do eat other fish than herring and have been known to scarf down seagulls but more commonly crustacea and molluscs. At least the latter don't move too fast and should be catchable.
These launches pose a bit of a dilemma for the Seal Rescue people. It is excellent publicity and, as they depend entirely on a) volunteers b) voluntary donations, seems to give income a bit of a boost. A while back they more actively advertised an event and 1,000 people turned up. You can't park 50 cars down the bohereen at the preferred launch beach, let alone 500 and the disappointed and disgruntled rubber-neckers then proceeded to bad-mouth Seal Rescue on Friendface and across the wider social media. Nobody need that sort of publicity. You can donate on-line. They need rubber-gloves; dog-crates; towels; detergent; electric kettles; Epsom salts; etc. etc. and money: you get buy any of the needed materials with money . . . except time, they cannot pay you for that.
Posted by BobTheScientist at 07:07