A few years ago I was chatting over the fence with my neighbour. He confessed that his wife had forbidden him to go shopping anymore. She'd send him into town to buy milk and flour at LIDL, and he'd come back with flour and a set of 48 drill-bits - which he figured wouldn't go off and would be handy sometime in the future. Before I stopped shopping altogether, I was in LIDL during their Polish week and bought a set of €9.99 to-the-armpit fishing waders! MY reasoning was that, once a year, I took my 4th year water chemistry students to do kick-sampling in a local river. Next year I was time-tabled off that course and so the waders have been on a bottom-shelf in my tool-shed ever since. 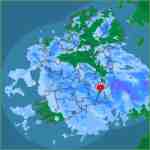 The waders came out this morning!  Storm Emma started cutting up at tea-time yesterday: bringing a lot of low-pressure moisture to add to the Baltic jet-stream we've had coming from the East for the past week. It's been snowing modestly since Tuesday evening with whistling Easterly wind which stripped the snow off the open fields and left it is heaps on the lee of hedges and at the gates between fields [must be the vortex]. I was a little concerned because there were drifts in the sunken lane that runs up to our house, particularly above us where open fields come right up to the lane; below the trees we have planted tend to drive the snow up and over the dip. At the top of our garden, I measured a drift at 65cm.  Woke up this morning to find that modest and elegant sweep of white had grown to 2m! It's still precipitating [L, red dot marks Shackleton Base]

How did I get up there to find out? I slipped into my Polish waders to shovel a few paths:

Prepper TB had also bought a snow-shovel and a nice robust yard-brush: shovelling need not be a penance if you have the correct kit. I was chatting to another rural pal two days ago and said that, if I lived in suburbia, I'd be doing more shovelling because the sidewalk and drive-way would be a finite do-able task; I can't shovel all 300m of lane, so I won't do any of it. We have flour so bread can be made. We also have oats, for flapjacks.  I'm keeping back one sack of sheep muesli for me in case this lasts a week. I think there are 29 snow-ploughs in the whole country, so we'll be dependent on the rain which may come up from the South over the weekend. With 2m drifts in the lane that handy access route is probably fritzed by Monday.  But with electricity still hanging on by a copper thread, we're better off than some thousands of people N and E of here - still bloggin' as you see.
Posted by BobTheScientist at 10:09