How do I love thee? Let me count the ways.
I love thee to the depth and breadth and height 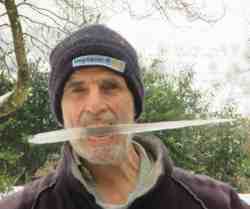 We need to count to be sure to be sure. Therefore we don't want to have confusion about what the counting words mean. I've suggested before that most people feel [before they start to think] that a billion is twice a million - after all a bicycle has two wheels and an icicle [example R from Storm Emma] has no wheels; so we must suppose that a micycle has one wheel. In the Dáil last week, the Government was defeated on a motion to abandon a recently created Strategic Communications Unit. The SCU was created by Taoiseach Leo Varadkar to blur the lines between policy and advertising with a €5 million budget to inform the public. The thing is that if people see something in print enough times they come to believe it is true even if that truth is established only by assertion and not by evidence. This idea has such an ancient pedigree that it is a Chinese proverb Three Men Make a Tiger. To come to a vote, there must be a debate, and so a lot of precious Dáil time was consumed by the opposition parties throwing shapes about a mildly controversial item that was in the news. It is aggravating because, in the scale of the annual government spend, €5 million is a piffling amount of money.

People who are functionally innumerate - most people, most of the time and all people, some of the time - will get exercised about an emotive but financially trivial subject and then allow load$a money to be spent on dull dull dull intrastructural projects which could be better thought through. C. Northcote Parkinson [prev], the ironic economist, cast that issue in his Law of Triviality: a committee charged with approving the design of a nuclear power-plant will typically spent much of its time arguing about the construction of the staff bike-shed . . . because they can grasp those issues.

Anyway, I was sent [by MeFi] to a numero-linguistic site which lists the words different peoples give to numbers. This is cute. Note how several languages, not English or Dutch, have the form 11 = 10+1; 12=10+2. Polari, just to be different, has 8 = 6+2 and 9 = 6+3. Sheep counting aka Yan Tan Tethera was used in many locally variant forms in these WEA islands to count sheep in the way my grandfather and his grandfather before him did. It is supposed to be based on a long dead Brythonic Celtic [as in P celtic] language check out 5 and 10 in Sheep and Welsh.
That led me on to million milliard billion trillion which is useful to know when you're talking about the National Debt [or indeed the Strategic Communications Unit]. It turns out the the Brits shifted over the last century from the European "long scale" convention of 10^6 = million; 10^9 = milliard; 10^12 = billion to the US "short scale" preference for 10^6 = million; 10^9 = billion; 10^12 = trillion. These are just conventions and either is acceptable so long as everyone knows which is being used. It's like using Latin names for species - if I say gorse Hungarians and Russians may not know what I mean; but Ulex europaeus is clear to everyone. And if we step outside the West there are other large number conventions which don't step forward in threes. The most notable, because used by 1,600,000,000 people in the Subcontinent: there Lakh is 10^5 = 100,000 and Crore is 10^7 = 10 million.

Tiangong-1 [yest] news: An updated ESA forecast issued today (March 30) said the 8.5-metric-ton (9.4 tons) space lab will fall to Earth later in the day on April 1. That's because the sun's activity is weaker than expected, ESA explained. [source]
Posted by BobTheScientist at 07:35