Scarlatina: a pretty name for a girl?  Nope, it's the medico name for scarlet fever. Scarlet fever is when a strep-throat, the transitory infection by Streptococcus pyogenes aka GAS Groups A Streptococcus, blows up into a more potent attack. As I explained last June, this change to virulence seems to be triggered by the Streptococcus getting itself infected by T12 virus. It's a dog-eat-dog world out there: so many cr'atures fighting for a living. As Jonathan 'Gulliver' Swift had it

So, naturalists observe, a flea
Hath smaller fleas that on him prey;
And these have smaller still to bite 'em;
And so proceed ad infinitum.
Scarlet fever has cropped up on The Blob, rendering Annie Jump Cannon deaf, killing Charles and Emma Darwin's youngest boy, and also, fully adult, George du Noyer the geologist and cartographer. Annie Darwin (and two sisters) survived scarlet fever in 1849 but succumbed to TB in 1851. In that last piece about du Noyer, I suggested that scarlet fever was so yesterday that medical staff might have difficulty recognising it. When The Boy, aged 12, came down with whooping cough (another bacterial infection, this by Bordatella pertussis), it took three visits to our health practice (2 nurses, 1 young doctor) to have his peculiar cough not diagnosed. A friend of ours who had been a nurse along the Swiss-German border in the chaotic aftermath of WWII, knew it instantly because she'd seen many cases in  late 1940s Bavaria.

Scarlatina has quite distinctive symptoms, mostly due to the T12-infected bacteria producing a tissue-damaging toxin AND the immune system's response to the invasion. Headache, swollen lymph-nodes in neck, fever, can suggest to anxious parents that they have meningitis in the house but a visit to A&E or the community health practice should draw attention to the sand-paper rough, red, rash starting on the chest and spreading to armpit and elbow, the bright pink tongue with characteristic white fur. The rash turns white if you press a glass against it, which shows that it is caused by the flood of blood to the site of infection: one of the classic symptoms of the inflammatory response. Inflammatory is good, although it makes us feel miserable as our immune system ramps up to see off another invader.

And I was quite wrong to suggest that it is rare nowadays because there has been a huge upsurge in the number of cases notified in England: 19,000 in 2016 and 17,000 in 2017. This spike in cases is up about 3x from the 2014 base-line. Nobody has a good explanation for why scarlatina should be on the rampage now because there has been no detectable change in the genetics of the bacteria or its hitch-hiking T12 virus.  And only a tiny fraction of these cases will need to be admitted to hospital. Most of the kids are sent home with a course of antibiotics and told to keep away from school. And don't go knocking the parents as anti-vaxxers - there is no prophylactic jab for scarlet fever. 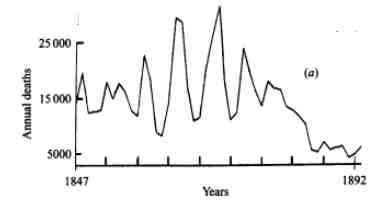 Very very different 150 years ago, the picture from Duncan, Duncan and Scott (1996), shows the cyclical nature of the epidemics through the 19thC. But check out the scale: there were as many deaths in 1866 as there were cases in 2016. Being warm, dry, well-fed and hydrated will do a lot to keep a tot alive until its immune system gets on top of an infection. Antibiotics help of course, but the fall in childhood mortality is as much due to clean water, adequate food (chicken nuggets will do) properly heated and ventilated homes and effective nursing care as it is to the high tech end of medicine.
Posted by BobTheScientist at 07:58