Jerry the Oil managed to get up the 300m of lane as soon as it was feasible on Tuesday night. We were a teeny bit anxious to get that done, even if it meant some extra shovelling, because when the thaw came in 2010, the lane went with it. On Friday night, as accurately forecast by the seers of Met Eireann, we had steady rain for about 12 hours. I was up at first light clearing the drain so that the snow melt could stay in the drain for the whole of its 300m journey to the county road.  That's just the lane-and-drain below us. Above there is 500 m of sunken lane that is still full of slobby snow drift which has been encouraged to melt by the warm rain. And melting is what it is doing.  After cleaning the drain, I held a 15 lt bucket under a step in the drain and filled it in about 3 seconds. That gives me a handle on how long the thaw will take. We are on our knees but cautiously optimistic that the thaw will continue in this steady enough fashion. In 2010, we were delivered 60mm of warm rain in a couple of hours which brought down a further 40mm of accumulated frozen water - 10% of the annual rainfall over a couple of night-time hours. That overwhelmed the culverts in the drain and spilled running water out into the roadbed . . . goodbye road. 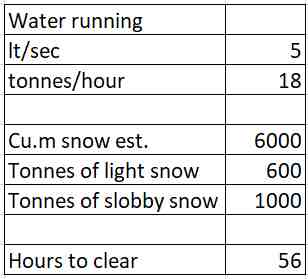 I've always told people that snow packs at about 10% the density of water. My pal Rene wasn't about to take this ex cathedra pronouncement from Dr Bob; he went off and measured 10x10x10 cm cubes of snow and came up with nearer 15% - much denser compressed at the bottom of a drift than fresh fallen at the top. Here are some estimates of density from Patterson's Physics of Glaciers. That source helpfully points out that not all snow is the same. I'm confident (to perhaps 20%) about the volume of snow drift that needs to be cleared. That's a gently curved snake of snow 500m long 4m wide filled 3m deep. That may be a little high but snow-melt is running off the field also.  That all suggests [big print calculations L] that it will take a couple of days to clear. I have clambered and lurched up the lane to discover that there is no snow left on the mountain above us, but still plenty in sheltered spots where the eddies of the blizzard left it. While up there, I've tricked about with a shovel where it is possible to divert running water off the roadway and into the field drains. Having done all that can be done with hand-tools I am now cautiously optimistic. Soon enough we can get on with Spring chores and normal sleep.
Posted by BobTheScientist at 18:42