Were you watching the Winter Olympics? Some rather peculiar 'sports' in the mix. Skeleton is where you launch yourself down a steep icy hill on a tea-tray. Speed-skating seems to require an immobile inside-track arm: even with this handicap, they are travelling at nearly 60 km/h. I have no time for figure skating which seems to require fit young women to get most of their kit off, the number of air-borne turns is secondary. Then there is curling, which is essentially bowls on ice, using a 'rock' rather than something more nearly spherical. The rules allow for a couple of competitors to sweep in front of the rock; but few know whether this speeding the thing up, slowing it down or changing its path. They can get pedantically peculiar about making the ice rink and marking it up - with paint and woollen yarn. The physics of curling. Rachel Homan appears to The One. But everyone in the sport is quite shouty: hurry, clean, hurry hard they cry then die die die. 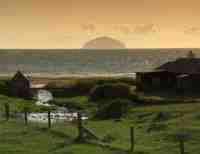 Just as fibre-glass and graphite have changed the equipment for tennis and pole-vaulting, you might expect that curling stones would all be made out of some composite material, about whose specifications everyone could get pedantically peculiar. But not so, it seems that all [19 kg] curling stones are obtained from a quarry on Ailsa Craig or Creag Ealasaid [R omantic view from the shore] an island in the Firth of Clyde almost exactly halfway between Glasgow and Ireland. Indeed the stones are composite: the upper part is common green granite while the running surface underneath is blue hone granite.

Ailsa Craig is now a bird sanctuary run by the RSPB on a 50 year lease. It used to be owned by the Marquess of Ailsa, the head of Clan Kennedy but he put it up for sale about 5 years ago, then reduced the asking price by £1m, then took it off the market, then died in Florida. You can find a nice selection of sea-birds there. The health of this multi-species colony was not improved by the introduction of rats Rattus norvegicus in 1889. After consultation with experts in ratology, 3 tonnes of Warfarin was airlifted to the island and deployed where there was evidence of ractivity. This blitz seems to have been effective and the last rat was seen in April 1991, just months after the start of the project. Both bird and plant life has since been recovering to establish new more abundant equilibria. That's a success! Massive attack seems to work. 'Almost every island in the world where people have been now has a population of introduced rats. Shiants, Scilly, Bouvetøya please note that hopefully.