Q. Where is Civilisation?
A. Just outside Mountrath, Co Laois: more-or-less in the centre of Ireland.
There you can find one man's attempt to see off the barbarians at the gate and keep one room in a warm house as a sanctuary in which to reflect upon the achievements of which humanity can be most proud. That man is Frank Kennan. In the 1980s, after a successful career in MegaCorp, he and his wife Rosemary took a one year lease on Roundwood House [R with dog, the stables are round the back], a huge heap of a place then owned by the Irish Georgian Society. Frank and Rosemary had a romantic dream to run the place as a country guest house. After that year's trial run, the Kennan's took the house off the IGS's hands and have had a going concern for the last 30+ years.

They were early adopters of the concept of marketing idiosyncratic home-from-home hospitality to folk who didn't want to see the same-again inside of another Holiday Inn. There are now several clearing houses of such adventures - Hidden Ireland is one. We took my mother out to lunch in one Hidden Ireland place [not Roundwood House, I hasten to add] on her last visit to Ireland. Dau.II asked for a glass of elder-flower cordial and was served a beaker of fish-stock. You can see how The Help might confuse two jugs of off-white liquid in a slightly chaotic fridge. If a small hole in the floor-boards is covered with a square of sheet-metal and a shifted carpet, then that is part of the charm.

Four years ago, Frank looked at his library and felt unaccountably happy to have gathered a collection of books which he knew and loved and believed to be valuable in a cosmic rather than a monetary sense. In this he went one up on William Morris "Have nothing in your houses that you do not know to be useful, OR believe to be beautiful" by changing the Boolean OR into an emphatic AND. He knows that almost every book published in English has been digitised by Google books but he believes that part of the pleasure, part of the didactic value, lies in the physical book. At the last count he has 870 books [searchable catalogue] in a comfortable room in Roundwood, which he calls The Library of Civilisation. He has set a limit of about 1,000 books, and is soliciting suggestions from you about how to fill the remaining spaces. The library was launched by an always civilised Senator David Norris and you can have 25 minutes of Frank's address if 2 mins isn't enough for you. Don't try to browse the library's website from anywhere so uncivilised as to lack true broadband because page turn-over takes a long time across our wireless 'broad'band. I downloaded the whole list into Excel which was quicker in the long run. The library samples widely across the Western canon on both sides of the Arts - Science divide. Frank and Rosemary's daughter Avril Kennan [now an advocate for research into rare genetic diseases] was educated, long after me, in the Genetics Department of Trinity College Dublin. Indeed that connexion is how I came to visit Roundwood and meet the Kennans at the turn of the century; but that's another story for another time.

I like the Library of Civilisation very much although I am a bit ambivalent about embracing the idea myself. I'm torn between the desire to de-clutter my life and a Canticle for Leibowitz concern that in the End Times Google's server farms will be among the first things to wink out. I think that's the reason I'm holding on to my 1953, almost complete [missing Volume I A-Anstey], revised 14th edition of the Encyclopedia Britannica which I bought for £6 from a junk-shop in Newcastle in 1987. Someone who comes after me may want to know about Confederate Generals of the American Civil War, or to seek clues about how electric motors work. While I'm still havering between clear vs keep, I can look at my library . . . and so can you: 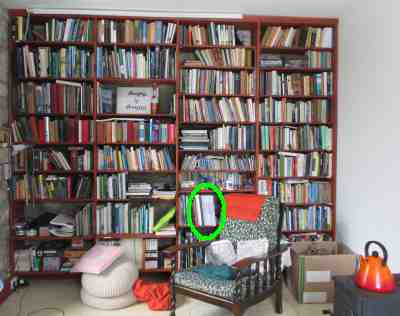 I think there about 1,000 books on the North wall of our living room [see above] where they form a handy barrier for thermal insulation. There are at least as many more books lurking about the property on shelves and in boxes. But this view has everything a chap could want for post-apocalyptic bliss. A lot of books [The Complete Blob in Ten x 200 post volumes is circled in lime green]; a chair with optional foot-pouffe; a stove with enough fuel and a kettle for tea; an inspirational calligraphy by Thich Nhat Hanh sharing a shelf with a bottle of brandy.  I haven't Frank's patience to catalogue my books but I have shared some part of my library in the past, and even offered a listicle of should-reads in 2013.

There is a little enough overlap between my books and Frank's and that's rather nice too. If we all agreed on The Canon, then nobody would be marching to a different drummer and we will need all the diversity we can muster when our World goes all brittle and crumbly. And another thing, Sciency books don't really give us much clue to Montaigne's question How to Live? You'll get a lot more of that sort of thing from the remaining fragments of Sophocles, even though he knew nothing about 3-D printers, nanotechnology or stem-cells.
Posted by BobTheScientist at 07:51