It's just a week since the Beast O'East started to deliver snow, wind and penetrating cold to Ireland [and the rest of NW Europe but I have no eye-witnesses in Hannover or Antwerpen]. Forecasting no longer requires us to listen to a series of random meteorological statements from Michael Gallagher the Donegal. Met Eireann has satellites, and storm buoys, a rainfall radar and a really powerful computer. With radar you can literally see the next dump of rain coming in, allowing you plenty of time to get the washing in. The guys and gals from Met Eireann strike me as being reliably accurate up to 3 or 4 days in the future. With all that raw data, intelligently analysed, we had 5 days warning that a cold snap with whipping cold Siberian easterlies would meet soggy warm Iberian weather and cause the mother of all storms round about St David's Day. And it was so. Not everyone behaved rationally to all that warning, there was a run of bread, milk, celery, meat, eggs. The Beloved, who will be handy to have around in the run up to End of Times, made sure we had plenty of drinking water in gallon bottles; tea, milk,sugar, flour, eggs, onions and cheese; snow-shovel and sweeping-brush; fuel for the stove; candles, matches, flash-lights. So we were all set. The storm came in and dumped snow; we shovelled paths, fed the sheep; made hot-water bottles. 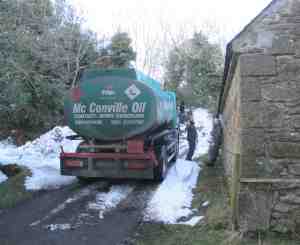 Then it was all over except for the thaw and it suddenly seemed like it was a long time before Xmas that we ordered heating oil. A dipstick revealed that we were down to the last 30 litres. The lane below us was 300m of rough with some slobby snow remaining and rather more compacted snow/ice where it had been run over by our notspeaking-neighbour's tractor. The lane above us still had towering banks of snow equivalent to 100s of tonnes of water in the event of a rapid thaw. If such a thaw ripped the entrails out of  the road surface it would be weeks before we saw an oil-truck in our yard. So we called Jerry at McConville Oil and he said he'd give it a go with his handy 20 tonne tanker, almost empty. Our speaking-neighbour came round 20 minutes earlier with the yard-scraper attached to the front of his tractor and lifted the worst of the icy-hazards out of the way. Slowly the tanker ground its way up the lane until >!Shazzam!< [see R] its hose was close enough to the oil-tank for delivery.  Sure we could have managed with a dribble of oil for a month - we did in in the Winter of 2009 - but it was nice to know that Jerry would go that extra mile to sort us out.  It's a bit like sledding the diphtheria anti-toxin through to Nome or one of Armanzo's or Pa's blizzard adventures in the Little House on the Prairie.

I've been going to work since Monday, parking at the bottom of the lane and setting off 5 minutes earlier that I might if I could drive to and from our yard. It's still very quiet in The Institute: a lot of our students hail from Wexford and Kildare where the snow still lingers in heaps. Coming home with a bag or flour and 2 litres of milk is different when you have to carry them 300m up-hill. Makes me think twice about buying stuff that we don't really need. And shovelling snow is really good for the abs. One of my work-colleagues lives in Waterford city and bought himself a snow shovel befire they were all sold out. He and a couple of neighbours, similarly equiped, spend much of Saturday shovelling out the front paths and side-walks of the neighbourhood: an exercise which was good for his heart - both actual and metaphorical.

You can create tremendous social capital with such positive responses to adverse circumstances.
Posted by BobTheScientist at 07:11