That would be today, 1st of March, St David's Day. There will be a lot of daffodils about in Wales today to put a golden gloss on their patron saint. The Linnaean binomer for the plant is Narcissus poeticus, I imagine because of the famous poem by poeticus Wm. Wordsworth:

For oft, when on my couch I lie
In vacant or in pensive mood,
They flash upon that inward eye
Which is the bliss of solitude;
And then my heart with pleasure fills,
And dances with the daffodils.
Since well before Shakespearian [Shagsprev] times, the Welsh sported a leek Allium ampeloprasum in their hats on this day but David Lloyd George, Welshman and British PM 100 years ago, thought daffodils were more photogenic, and that fashion caught on. 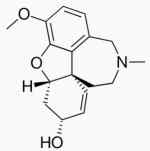 Daffodils are not just a pretty face and poetic inspiration; they are a source of Galantamine a plant secondary compound [structure R] produced by Narcissus spp. and other related plants in the family Amaryllidaceae, especially Galanthus caucasicus the Caucasian snowdrop. Galantamine is an effective acetylcholinesterase inhibitor. Acetylcholinesterase is the enzyme which breaks down the neurotransmitter acetylcholine [bloboprev] ACh. ACh is used at the interface between motor-neurons are muscles and also rules the parasympathetic division of the autonomic nervous system that I was tricking about with, and making myself queasy, a couple of days ago. Its properties were first mobilised for medical reasons in the Soviet block in 1950 where it was noted that leaving ACh in the neuro-muscular synapse would continue to stimulate the downstream muscles and so combat myasthenia gravis and other weakness of of the muscles. That's clever. It's also an approved for/against poisoning by the nerve gas sarin [prev] for which we can thank the fact that the US Army pays for research.  It is also used as a treatment for early Alzheimer's but you want to be a little bit careful there because oral acetylcholinesterase inhibitors will inevitably have systemic effects. We haven't the technology to tell the circulatory system to deliver this package to the hippocampus [memory palace] and NOT to the heart, intestine, kidneys, muscles and all the other places which use acetylcholinesterase to tidy things up.

What's in it for the plants? A lot of plant secondary compounds - the biochemicals that don't have obvious function in transport, energy metabolism, or excretion - have toxic effects on herbivores and so deter these animals from eating the plants that produce them. No matter how hungry you are, you should be wary of eating daffodils. Stick to the leeks - quiche lorraine [for heaven's sake don't use onions <ptui ptui>, leek and potato soup, or especially for the day that's in it an oggie.

More Welsh triv on Quora and three years ago on The Blob.

Posted by BobTheScientist at 07:08