The interface between the uncompromising rigour of mathematics and the back-scratching strokes of politics can help shake us out of our certainties. The world, particularly the Lib-Dem world, is still reeling from the shock of the new POTUS. Some of these losers [a potent and emotive term here] have gotten indignant at the fact that Clinton won more votes than Trump and yet the US Electoral College system ensured that Trump secured his term in the White House. With 20/20 hindsight, it could be said that the fault lies with the Democrats for having a failure of nerve and choosing a centrist Clinton rather than Bernie Sanders from the Left. That's really relative, The French Left thinks of Sanders as center-right. The US Democrats collectively figured that Sanders was too near the long tail of Democratic sentiment and couldn't appeal to the fat mass of median America. Everyone now knows that despite the vote of people [won by Clinton 65,844,954 (48.2%) to Trump's 62,979,879 (46.1%] the Electoral College had 306 votes for Trump and 232 for Clinton and so Trump won.

There's recently been a bit of traction on congressional districts in the USA. It could be because the congressional districts are closely related to seats in the Electoral College, and that has risen to the surface of the journalistic mind. How each state divvies up the map to allocate the voting blocks is entirely up to each state and some of the districts have such peculiar shapes that some observers are tempted to call 'foul'. On the left are the two districts which won the least blocky blocks of voters prize. Jigging around with district boundaries to achieve political advantage is called gerrymandering after Elbridge Gerry, Governor of Massachusetts 200 years ago, The point of gerrymandering is to gather all your opponents' voters into a small number of districts which they then win overwhelmingly. That means there are only a few opponent voters left in the rest of the constituencies, so you win a majority of the seats. There is, since Gov Gerry and before, a long history of this sort of finagle. 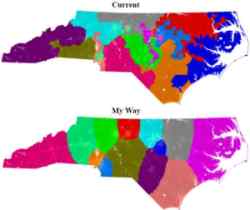 How do you know if your electoral district/system is gerrymandered? One neat and objective way is to look at the map and compare the perimeter of each district with its area. The most compact shape is a circle where the perimeter is 2*sqrt(π) * area: if the area = 1 then the perimeter = 3.54. A square is a pretty good approximation of this optimum: if area = 1 then the perimeter = 4. But the ratio for a long stringy area like the congressional districts shown [above L], is going to be much bigger: a rectangle 0.25 wide and 4 units long has an area of 1 unit but a perimeter of 8.5.  The people living at opposite ends of such districts have nothing in common . . . except their race. or their tendency to vote Democrat. North Carolina has had two of its districts recently invalidated by the Feds for being racially driven. Brian Olsen has been tricking about with the population stats for each state and creating districts that, given the reality of rivers and mountains and the location of population centres, look more logical and less manifestly unfair [See above R for NC 'current' vs 'my way' and here for the whole country]. His measure of compactness is the average distance from the centre of the district to Joe Voter. Olsen gives a TEDx talk which is a little halting but compelling viewing for political wonks. Frank Evans, another number-cruncher gives another TEDx. He points out that it order to drive [the American way!] by the shortest route from one end to the other of the string-theory NC district shown you must leave the district 8 times. Lovely lovely data; I drool. 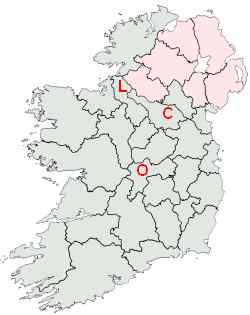 I was getting all smug and complacent about how we don't have any of that dishonest manipulation of the electoral boundaries here in Ireland because the parliamentary constituencies are a) based on medieval counties [see L] b) decided by an independent electoral commission which, every five years, looks at the census data and takes account of the steady drift of people from West to the East of the country and the relentless trek from rural areas to the bright lights of The City, of which we only really have one - Dublin. This commission then divides the country up into 3, 4 or 5 seat constituencies, so that they total the number of seats in the Dáil - currently 157. See how some of the counties are a bit strung out: Offaly / King's County where my people are buried, Cavan and Leitrim identified [L]. Leitrim is so peculiar in its dumb-bell shape and so divided by Lough Allen and the Shannon that it is not possible to drive a car from the South end to the North without leaving the county. Nevertheless it is currently bundled with Co Sligo into a four-seater constituency. Leitrim is so depopulated that the joke (as old as rural electrification) is Would the last person to leave the county please switch off the light?

For nearly 100 years, Ireland has been independent of its larger less democratic neighbour next door. Less democratic? Head of State is a hereditary monarch, for starters. But in the UK, they have  a simple-minded "first-past-the-post"  electoral system. The country is divided into electoral constituencies, votes are counted and the man (it's still too often a man) with the most votes is the MP for the next 5 years.  This means that minority interests, and small parties, don't really have a chance. The system is stacked so that there are two mega parties at any one time - like Republicans and Democrats in the USA. Currently it's Conservative and Labour; 100 years ago it was Conservative and Liberal; 200 years ago Whigs and Tories. There is currently a single Green Party MP. Single seat constituencies disenfranchise the most voters: in a three horse race, say Con v Lab v Lib, the winner needs only secure 34% of the votes cast; which might be as few as 50% of the eligible voters.

IF the USA really wanted to be more democratic - so that blacks, Asians, women, greens, communists, and veterans got to be better represented in Congress THEN they should embrace multi-seat electoral districts. At least with gerrymandering, the blacks [or whoever is being bundled together across the state] do get a few representatives. The other problem with single seaters is a relentless surge to the median - same-old, same-old, boring, institutionalised centerist certainty. It is no coincidence that US and UK have two more or less indistinguishable political parties one slightly right of centre, one slightly left but both buying into capitalism, globalisation, oppressing the workers and despoiling the planet.

By the same reasoning as single seat constituencies in UK and USA are undemocratic, in the Irish model, 3-seaters are inherently less democratic than larger constituencies with more seats. In 2007, our local Green party candidate secured a seat in the Dáil on the 9th count having started with 8% of 1st preference votes. That would be inconceivable in a 3-seater.  In 1974, the distribution of electoral districts was under the control of the Minister for Local Government James Tully, Fine Gael. He hatched a cunning plan to create a large number of 3-seat constituencies, particularly in Dublin [half the electors!], that would polarise the vote and squeeze out his political rivals in Fianna Fáil. Polarised politics mean that a small swing in popularity can have a disproportionate effect on the election. And it was so: Fianna Fáil swept to power with an absolute majority of seats after offering a series of absurd promises to win votes: including abolishing car tax and domestic local property tax. The whole plan had blown up in James Tully's face and the word Tullymander was coined.  Four years later, Tully was back in power as Minister of Defense. While on a visit to Egypt in 1981 on the anniversary of the Yom Kippur War, he was caught up in the assassination of President Anwar Sadat and took a load of shrapnel to the face when one of the assassin's grenades exploded in the crowd of dignitaries. Reality matched the metaphor - who doesn't believe in an angry divinity?
Posted by BobTheScientist at 06:22