I was reflecting recently on the latest hot news about evidence for life from the distant past.  Why and how these microscopic iron-rich tubes came from is one sort of question; another is a further push back in time to ask where life itself came from. In casting about to get background on the story [I read all about me so that you don't have to] the phrase Martian meteorite came up and that was intriguing. Space geologists have convinced themselves that some chunks of space debris which have come to earth have been earlier chipped off the old block of Mars, our nearest solid neighbour. What are the chances of that? Well, not very good: of the 60,000 identified meteorites which have made it to the Earth's surface, only 132 have been given the red flag.

How so? On what evidence?  It's all to do with putting things in bins. If you concentrate on some field of the natural world and spend enough time, inevitably you find yourself saying - this whatever is like that something which passed through my hands last week. This alpaca is more like that cow than either was to that horse. This flower has five petals and net-veined leaves and so does that one - we'll ignore the fact that their colours are different. It's the same with meteorites. Space geologists have given names to broad classes of similar extra-terrestrial rocks: Shergottites, Nakhlites, Chassignites etc. Then in the 1970s NASA sent the Viking landers to Mars and these brilliant instruments sampled the rocky surface and the gaseous atmosphere and relayed the readings back to Earth. It turns out that the characteristics - rare earth elements - and the gaseous inclusions - mainly oxygen isotope proportions - of Shergottite, Nakhlite, Chassignite aka SNC meteorites look uncannily like those of rocks on Mars. 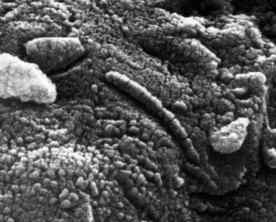 Then in 1984, some meteroite hunters in Antarctics found a 2kg lump of yellowish rock now called Allen Hills 84001. It isn't similar geologically to SNCs but the atmospheric signature is, like, totally Martian. In 1996, a microscopic analysis of the surface by David McKay, Everett Gibson and Kathie Thomas-Keprta from NASA yielded the picture [L]. The NASA team asserted that, although ALH84001 crystallised 4 billion years ago and was knocked flying from the Martian surface 17 million years ago, it only arrived in Antarctica 13,000 years ago. Furthermore they suggested that teeny streaks of haematite looked remarkably like similar to terrestrial, and definitely biogenic, streaks. Over the years, the geological, astrobiological establishment have gone at this iconoclastic suggestion hammer and tongs and, to their own satisfaction, demolished the several strands of evidence that support the idea of life on Mars possibly before life on Earth. One of the factors is that the 'fossils' on ALH84001 are 10x smaller than the smallest current autonomously replicating cells. The stronger case is that life originated Out There and was delivered to Earth as a neat meteorite-borne package and has evolved to the astonishing diversity we see today. That strikes me as a null explanation: it just kicks the can further down the road backwards through time and space to a yet more inaccessible origin, without helping understand how the miraculous transition occurred

With this in mind we should be more careful with sending stuff out from Earth lest we start the life-ball rolling on some other planet that isn't quite ready for it. Before Carl Sagan and the Viking team sent the landers off to Mars they autoclaved them in a pressurised biocontainer and heated the whole parcel up to 110oC for 40 hours. That will kill all the bugs, they thought. Not so much. In F&F this month we're 'doing' anaerobic spore-forming bacteria like Clostridium. These boys form a heat, desiccation and chemical-warfare resistant spore when the going gets tough and wait things out until the local environment gets more sunny.  Like when treating intestinal worms with one dose to kill the adults and then a subsequent does to kill the hatched eggs, it would have been sensible to bring down the temperature sometime during the 40 hours to fool the spores into becoming lifelike and vulnerable and then cranking up the temperature again. In the 1970s we weren't sufficiently convinced that we'd destroyed the planet we live on that making Mars more life-supporting was a desirable long-term goal. Then again, the certainty and technological optimism of those days was not above terraforming another planet for the benefit of mankind. Maybe they did.
Posted by BobTheScientist at 06:26