5th March 1981 was the launch date for the ZX81 a super-cheap, super light-weight and super-empowering personal computer. It replaced, superseded and improved on the ZX80. That prototype was based on a Z80 chip - hence the name of the product with a techie X to make it geek-seXy: think Fireball XL5, X-files, The X from Outer Space, xc. xc. Super-cheap meant that it had to be clever, designed for slim rather than chic, it looked and felt cheap. In a way cheap was part of the message, it not only looked cheap, it WAS cheap; 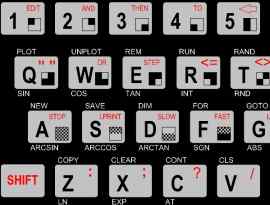 It could shave costs because it used all sorts of neat appropriate-technology solutions to the problems of carrying no fat. It was just a processor and a barely functional touch-sensitive keyboard. You were expected to use your TV to see what you were typing and a cassette recorder to store what you had typed. Sinclair, the designing company reasoned that if you could afford £/$100 for the computer, you already had a telly and cassette machine. One of the amazing information-rich efficiencies was that each key had 5 actions [L] rather than just upper and lower case. Indeed, there was NO lower case but you got Trig-functions, graphics pixels, BASIC commands, I/O instructions instead. Once you got the hang of it, you could hammer out code really fast. And for the first months after launch, that's what you had to do, because there was no software that you didn't input yourself. 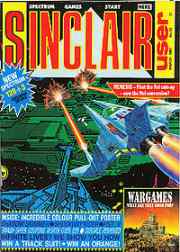 There was computer journalism at the time, but the ZX81 boom carried new magazines, like Sinclair User [L] aka SU forward. There was quite a reality gap between the exciting cover-art and what computer graphics were capable of delivering back then. In a sense that was good because it encouraged youngsters to fill in the gaps with their imagination. Rather than, as now, leaving nothing to the imagination as you pant after Lara Croft or kill pedestrians in Grand Theft Auto. In a typical issue of SU, you'd get pages of BASIC code that you'd spend the weekend typing in and hope that didn't transpose any lines or forget any commas. In 1983, some genius created a working chess program in 672 bytes. The graphic of the cover here [L] is 16x byte-bigger! If you want a gripping read, you should buy [£0.01!]  Backroom Boys by Francis Spufford [brief-prev] and read the chapter A Universe in a Bottle about the development of the space-trading game Elite. You can google-books a preview. Those boys could code. It is slightly iropnic that, 30 years on, we had to start coderdojos across the land to encourage youngsters to write their own, initially clunky, code rather than sitting all passive and buying their thrills.

I've written before about how The Beloved was there at ground level. Hired as a secretary, it turned out that, despite a formal Irish Times Secretarial Course diploma, she couldn't type fast enough or clean enough. But she could do whatever else needed doing round the office and the company was in the process of going viral, eventually shipping more than 1,500,000 units. She grew with the company - it didn't hurt that both Clive Sinclair, the boss, and The Beloved, the help, loved the poetry of WB Yeats, She blagged herself a transfer to Boston when they opened an office there to service the US market and left the company 3 years after she started as Customer Service North America. The fact that I was then living in a basement as bone-poor graduate student had something to do with the transatlantic shift. On the back of her salary, we were able to move into a semi-basement apartment (a step up!) in Brighton, MA conveniently close to BU and the Sinclair regional office, near Mass General Hospital, downtown. Plenty of reasons to be grateful to the ZX81.
Posted by BobTheScientist at 07:50