In January this year, after 5 years without rain there was a dramatic drought-break in Northern California. Suddenly there was more water than anyone new adequately how to deal with. I mentioned the story again a couple of week later by way of saying that Mr Trump's 'promise' of $1 trillion$ was probably not going to be enough to fix all the bridges, culverts, dams and road-pavement that was beyond their sell-by date. The cost of just cleaning up the mess at Oroville up till now is in excess of $100 million. Here's good footage showing water moving before, during and after the over-flow crisis at Oroville.

When we left Oroville on 13th February, the rain had eased off, if you can call 13in = 330mm in 4 days an easing off. The emergency spillway was still in danger of being utterly destroyed through under-cutting by the flowing water and the reg'lar spillway had a hole [see above, the yellow Lego figures are about 2m tall] big enough to bury my 'umble 'ome and another half-dozen houses of similar size. But the California department of water resources DWR were left with Hobson's Choice and had to let water out of the brimful lake down the compromised spillway. Without Hans Brinker the hero of Haarlem to stem the flow, the rushing water ate at the edges of the hole and then ate at the edges of the hill and than started scouring out the very bedrock. In about 20 days, 1.5 million cu.yds = 1.1 million cu.m had been stripped out and dumped into the Feather River below. Every day of that meant another ?$5million? in damage and erosion that would eventually have to be repaired. This what a million cu.m of crumbled concrete and bedrock looks like - mainly grey in the brown river: 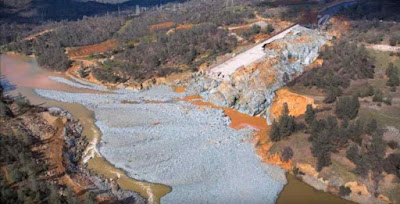 You can see the almost white strip of remaining spillway near the top right of the picture. This is after they had scrabbled a channel through the debris field (you can see it flowing along the left edge of the heap of grey rock). They did that so that the level of the river could be lowered below the out-fall ports of the Hyatt power-station at the base of the dam - off-camera to the right. On an engineering side note, you can't run water through the plant unless you are taking electricity off the turbines - if they aren't engaged with the magnets they spin so fast they melt the bearings and explode. They couldn't run the electricity because the cables and pylons tracked off through the flood disaster zone and had to be removed!  It was a fine old mess of a 'normal accident' or one dam thing after another. Here's a picture of before (normal spillway gush 2011), damage (7th Feb 2017) and after (27th Feb 2017): 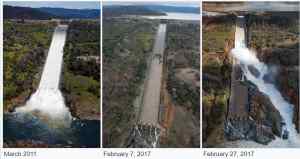 But the DWR hired every 20 tonne dump truck, every bull-dozer and every monster back-hoe in N California and contracted them to move that rock out of the river. One of these massive diggers costs maybe $50,000/mo to operate and the film footage shows dozens of them scurrying about the landscape. After 10 days of round the clock digging, they had cleared much of the spoil from the riverbed and the water was able to flow downriver. More importantly the power-plant was able to open ports and start to generate electricity again. This meant that anything up to 10,000 cfs (cu.ft/sec) that's about 1 million cu.m/hr which sound a lot but isn't going to make much of a dent when there are acre-ft of water the other side of the dam: it can lower the lake at about 1cm/hr. But snowmelt and rain is adding 5x as much, so it's a wee wee solution. Load-carrying helicopters have delivered new pylons and sackfuls of rock 'armouring' to fill the new canyons below the emergency spillway. These boulders have been glued together with thousands of tonnes of shotcrete - sprayed from concrete mixers through special hose-trucks.  Some shotcrete has been judiciously added as 'pointing' to smooth out the ragged lip of the broken reg'lar spillway.  It's been the most tremendous engineering project; a triumph of American can-do and steady nerves . . . and luck with the weather (all those Christians praying, I guess).  But, being America, there has been a parallel load of bonkers negativity / paranoia: 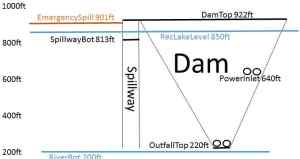 The top of the emergency spillway is 900 ft above sea-level, the dam itself is 922 ft. On 17th March 2017, the lake level reached 860ft and rising that's 10 ft higher than the recommended lake-height according the the Army Corps of Engineers. They opened the busted spillway aNNyway under minimax conditions. If they dribbled water down the spillway at 10,000 cfs then it would head-cut the lip: potentially back to the spillway gates otoh if they sent the 100,000 cfs max load it would scour the hillside below the lip and fill the goddam river up again. They happy medium expert opinion / guesstimate was 40,000 cfs. That way, the water would blurf into space and into the existing plunge pool where some of its energy would be dissipated.  In many ways the whole fiasco has been an engineers wet dream.

One final thought: nature is full of homeostatic balance and doesn't handle wild fluctuations very well. California's a Garden of Eden. Downstream from the dam are hundreds of hectares of vinyards, olive, almond and orange groves, orchards and market gardens. Those nearest the river are protected by levees - artificial embankments that are held together by inertia and vegetation. Letting the river level go up and down like a yo-yo is ungood: the levees saturate with water from the high water mark; if you allow the water to drain away too quickly the saturated earth slumps into the river taking away years of natural ground-cover and its mutually supporting root structure.

Juan Brown, a local airplane pilot, has been my touchstone for commentary. His channel is called blancolirio and this is a compendium of all 22 of his oroville videos.

Now some context. The $100 million is just staving off disaster, they are still soliciting opinions about the long-term solution and hoping to build it this Summer before the next rainy season.
Oroville may be the tallest dam in the US and the spillway may be 55m across and 2km long but it's not orders of magnitude bigger than other engineering projects that are in urgent need of attention across the USA.
Note: $1 trillion is not twice the size of $1 billion, although that's how we internalise it. $1 trillion is an unimaginably large pile of money. It is the the entire tax-take = total govt spend for a piffling country like Ireland for 20 years!
Posted by BobTheScientist at 06:55