Free food, too much

I have a PhD, so I was a graduate student once, and was never so lean and hungry as in those days. At 10am on Fridays, the department would offer coffee & donuts as a social mixer. It was very well attended; you could casually encounter the Faculty who were a little intimidating in class and generally network your way round the whole department if you were at all interested. But the draw for the graduate students was mainly the free food. I though, and still think, that it is an excellent idea. I'm not sure if it still goes on in these straitened times but coffee and biscuits were available at 11am every morning in the TCD Genetics Department. I always had a small frisson of horror when people would go through the tin of biscuits picking them up with their fingers and then leaving them back. Here and now, at The Institute, we have to pay for our snacks, so I don't be bothered. Indeed, I am a net giver because I will occasionally cook up a slab of flap-jacks and leave them in the office. And, of course, there are the Darwinday donuts. 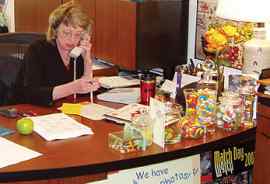 Here's an interesting study by the staff at WaPo concerning givers and takers at communal candy-jars. In the desperately privatized US, it would be impossible for The Company to supply the candy, but some members of the community have a candy jar/bowl which they have been keeping topped-up for more than a decade. There is a hint that some of these would be Johnny-no-pals if they didn't provide sweeties for their office-mates . . . or at least believe that to be the case. See the idea [R - is that for real? that's a helluva lot of empty calories.]. But the basic idea is that giving and taking candies in this way is primarily a social thing rather than an alternative to bringing in a sandwich for lunch.

I am still reading Daniel Kahneman's Thinking, Fast and Slow [prev]. I noted back a while, that thinking is an energetic activity. It requires effort and therefore glucose and oxygen to carry out rational  activity. This is one reason why the default position is to do things to a program or by instinct because this Fast, System-1, thinking is less costly in calories. Turns out that decision making is a subset of thinking and so decisions require effort. Kahneman suggests that there are larks and owls = morning people and night people. Each cohort has a different pattern of diurnal mental activity and that we are poorer at making decisions during our metabolic off-time. One of the consequences of decision failure can be weight-gain.

Presented with a choice: will I go to the fridge and scarf down that last slice of cake 20 minutes before bedtime . . . or not. Night owls won't give in . . . perhaps because they aren't going to bed yet. But if you've been awake for 16 hours and you write 700 words of bloggononsense before breakfast it's all too easy to go for cake. A pal of mine in the US has put on a lot a weight over the last 30 years - it's almost a patriotic duty over there according to the ballooning statistics. She' s not stupid, she's been trained in the catering trade and she knows, accounts for and limits the calorific value of every meal. But after than last meal, her good intentions go all to hell in a bucket of pop-corn or a catering-pack of potato chips. I can see where she's coming from. I have two slices of toast for breakfast, two slices of sourdough and cheese as a sandwich for lunch, come home for dinner and should think great thoughts or read a book until it's time for sleep. But it's really hard to resist . . . food . . . and one square of chocolate fatally becomes 6.

20 years ago, when we first moved down to the farm, we spend all the money of under-floor heating and double-glazed windows, and it didn't look like we going to make a living out of organic potatoes or free-range eggs. So I continued to work in Dublin and rented a place to stay up there  to save me from spending 5 hours a day commuting. Most evenings after work I'd go to the nearest supermarket and buy something simple to cook for dinner. Once I had a near-death experience with a value-pack of chopped cabbage. The marketing department must have seen me coming because, on a regular basis, they would have  a special on 2 finger Kit-kats. 15x or once 24x in one packet for a competitive price. Thrifty me would say: wow! that could a  month of desserts for half-nothing - and pop the monstrous package in my basket. Disaster: living alone with no TV it was impossible to stop at one bar. It is a wonder I don't look like the Michelin Man - you may call me Le Gonflé.
Posted by BobTheScientist at 07:18