Every Monday for the last year, I have hung out with my aged father-in-law Pat the Salt and the other ancients of the town where that old sailor has washed up. He is the oldest and I am the youngest and the dozen plus between make up the Heritage Group. There is a plan to record Ye Olde Dayes as an oral history project. Four weeks ago, I was getting mildly excited about the prospect of playing Bingo, a game of chance, with The Heritage Group. Bingo is a sort of pub-quiz for know-nothings. They both serve as a vehicle for social inclusion and community. Pub-quizzes require you to recognise Prince Harry and the Taj Mahal; to know the year the pope came to Ireland; and to stoutly maintain that elephants have four knees even when you know this is nonsense. For Bingo you need to be able to count up to 90.  The latter should be easy if the numbers are called out in whatever language you speak. 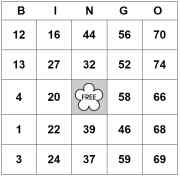 Last week, we had a practice session so that everyone would be up to date with a game that they might not have played for 50 years. Getting up to speed with the protocol is the major part of the battle except if the numbers are called in a foreign language . . . or a language that you left behind even more than 50 years ago.  As part of Seachtaine na Gaeilge, the week of Irish language, we signed up for playing Bingo in Irish. On the Monday of Patrick's Week we all gathered in the room above the library to play Bingo as gaeilge. Instead of regular, normal 15 numbers or a block of six bingo cards, someone had gone off down the interweb and come up with a children's version [R with extra big numbers].  This did not make things easier, not least because we'd been in training the week before with adult cards. Does it matter? Not much, because, as I say above, it's just a bit of craic to pass an hour or so with friends. But then again, in these super sensitive times, maybe it is a teeny bit disrespectful to suggest that because old people are a bit leaky top and bottom they can/should be treated like children, hmmmm?  But there is a long tradition along these lines since Wm. Shagsper if not before:

The sixth age shifts
Into the lean and slippered pantaloon,
With spectacles on nose and pouch on side;
His youthful hose, well saved, a world too wide
For his shrunk shank; and his big manly voice,
Turning again toward childish treble, pipes
And whistles in his sound. Last scene of all,
That ends this strange eventful history,
Is second childishness and mere oblivion,
Sans teeth, sans eyes, sans taste, sans everything.
Posted by BobTheScientist at 07:28