Indiana is 10% bigger than Ireland and has about the same population: 6.6m IN 6.3m IE. Ireland is traditionally divided into 32 counties - 26 in The Republic. Indiana is micro-divided into 92 counties. The United States prefer their democracy local: there are several places in New England where the town meeting allows government by plebicite. The second Tuesday in March = Town Meeting Day - is a state holiday in Vermont. I am sure there are advantages to this form of direct democracy but note that most of the democratic world elects officials and then lets them get on with it.

We've just been dragged through the absurdity of changing the clocks - Spring forward; Fall back - and I had to wander about the house and my car changing the hours hand. My antient but serviceable phone needs to be told what the time is although yours almost certainly can work things out for itself - that's why it's called a smart-phone. Making things easier makes the brain less resilient: computers remember passwords so we forget them; direct debits and tappable cards make it easier to separate us from our money; sustained research gets onerous because of Google . . .

I've ranted about the clock-changes before and there indicated the real cost ($400 million/year in the USA) of tricking about with
our bioclocks: heart attacks, road-traffic accidents
and work-clocks: missed appointments and flights, lower productivity.
So there is a distinct advantage to staying in the same time-zone all year. 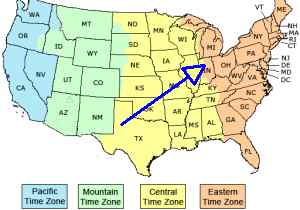 Which time-zone, though?  It's not a problem for us in Ireland - we just do what the Brits do. Our largest trading partner and nearest neighbour gives house room to a million of our citizens and it's simpler for the most of us if we just Carry on Up the Colony. Brexit may shake us up and maybe in ten years time we'll sign up to whatever they do it France. Over the last 100 years, Indiana has been through the existential mill over time zones. The continental US has, as shown above, four time-zones and Indiana (and Kentucky and Tennessee) fall across the 'natural' time-zone boundary.  There are 360 degrees of longitude and 24 hours in the day, so the sun rises an hour later if you are 15 degrees further West.  Clifden on the West coast of Ireland is fully 10 degrees behind Greenwich. Tennessee and Kentucky are wide states and comparatively large, so there may be good reason for splitting them but Indiana is small (and perfectly formed) and should, surely, agree to be one or the other.

None of my business, of course, my only locus standi wrt Indiana is that my sister worked for a few years at Indiana University Press and we went to visit with her in Bloomington IN a couple of times. Bloomington is a lovely University town which punches way above its population for Arts and Culture. That was one of the reasons why writer Bill Bryson washed up in Dartmouth NH, another university town, when he returned to America after decades in England.

If you look carefully at the US time zone map you'll see that Indiana (identified with a large blue arrow) mostly follows Eastern Standard Time but there are two enclaves of Central Time at the top left and bottom left of the state. This is made a teeny bit clearer if we look at the timeline for timezone change over the last 100 years: 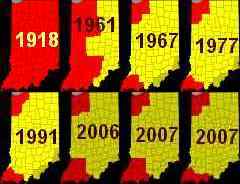 In 1918 The Feds = US Congress passed the US Standard Time Act to prove that they were running a country not a collection of Greek City States or Balkan republics. That Act also implemented Daylight Savings Time DST although as the US stepped down from a war footing, that part of the deal was rapidly scrapped . . . although re-mandated in WWII. As you see from the multimap image above, Indiana was dumped into Central and stayed there for 43 years, but some counties in Indiana has changed clocks on itself at least 7 times subsequently. The red enclaves in the corners are a rational local approach for uniformity. The NW corner of the state is basically the Chicago IL - Gary IN - etc, conurbation. Chicago is the third largest city in the US and will inevitably suck its suburbs into step. The theatres are in Chicago and you don't want to be late for a performance.

A similar, weaker argument applies to the Illinois-Indiana-Kentucky tri-state area [shown in Red L] which scrapes together a million people. Chicagoland is about 8x bigger. The circular gestalt of IlInKy3 suggests why it shares a timezone. It is within the signal of several TV stations: no better reason than that everyone can tune into 'Friends' at the same clock-time.  Then there is the fraught issue of  DST, which Indiana was notoriously against for many decades: they called it Fast Time. Possibly in reference to the fact that if time ran too fast, the straw would be ripped out of the corn-farmers' mouths and their John Deere hats wouldn't stay on straight.

"What time is it in Indiana?"
If you know please answer on a postcard.
Posted by BobTheScientist at 06:50