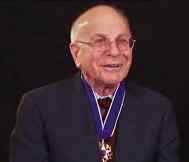 No no I'll spare you an essay on the nature of sin, I'm not that sort of boy. Here 'wrong' is about thoughts that cause us to do the wrong thing by making erroneous judgments because we are too lazy to work out what the correct answer is. My current book is Thinking - Fast and Slow by Daniel Kahneman [R with Presidential Medal of Freedom ribbon] which came out for the Christmas market in 2011 and caused a massive stir among the chattering classes = The Guardian. Someone (me?) gave me a copy either that Christmas or the next one and I said I'd read it later. Later is now and amazingly two quite different stories that I had flagged as possible blob-copy have their origins in TF&S; it's weird reading the antecedents after the offspring.

The book is full of neat stories and anecdotes that I want to share, and you're advised to see if you can find a cheap reading copy for 0.01c . . . you can't but for £/$1.99 it is yours! The first point is the assertion that thinking takes energy and there are various appropriate-technology ways you can prove this for yourself. Years ago the clever wags of the american media assassinated the character of President Gerald Ford by saying that he was too thick to walk and chew gum at the same time. Well we are none of us very good at such multitasking. Go for a walk with a numerate pal, ask them to multiply 23 x 47 in their head . . . and watch them stop dead to accomplish this task. Kahneman also notes that walking slowly can be good for thinking things out - he suggests that the additional blood-flow required may serve as a rising tide to float some boats in the brain. But his experience is that walking faster, so that the heart rate and the breathing increases detectably plays merry hell with your ability to think clearly. Our body just doesn't have the capacity -in glucose and oxygen - to think and exercise.

Another point which we have sorted out now since TF&S is that multitasking is no such thing, it is task-switching. Our brains, like single processor computers, can only do one thing at a time and if we switch back and forth fast enough it can look [to ourselves and others] that we are doing them both [or all!] simultaneously. Multitasking is a damn-fool business because task-switching itself is a significant drain on the budget and flip-flopping between tasks comes at a huge expense in energy. Better to stick to one thing and carry it through to completion, THEN do the next big thing. This is why always-on smart-phones and email-alerts are so desperately counter-productive and inefficient.

One of the reasons why I never got into the book when I first received it was the clunky and arbitrary names Kahneman gave to the Fast and Slow thinking modes - System 1 and System 2: I had no intuitive feeling that system 1 was fast; or was it the other way round? and the mental effort to remember which was which made me throw the book to the other end of the sofa. I have more stamina now. System 1 is a set of pragmatic solutions or judgments that work rather well most of time - so long as we only have to deal with finding food and avoiding predators in the Serengeti. In the modern, more complex world these knee-jerk reactions can seriously mislead us. System 2 is the rational, quantitative way that we process information which cannot be easily sorted by the simple fast-track rules. Kahneman recommends forcing yourself to engage the System 2 gears [slow] on more occasions that we are strictly comfortable with because System 2 can show that the first, knee-jerk, pub-quiz, answer is just . . . stupid.
Posted by BobTheScientist at 06:38