F is for Eponym 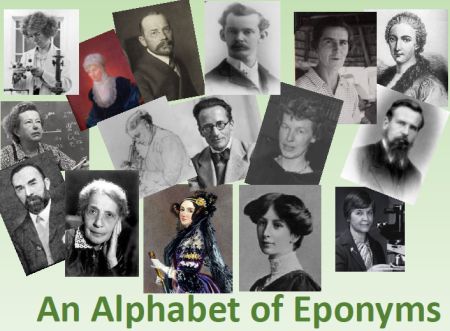 Epic fail, me. A month ago, I undertook to create an Alphabet of Eponyms. Then we had a progress meeting and objections were made about the sex-ratio. Fairy nuff. We dumped half the patriarchs and scrabbled for things to be included so that we began to approach a 1M:1F ratio. Some of the previous choices were oversights, bias and want of imagination in poor old Bob the Biologist.
Meitner is well 'ard but some of my other affirmative actions could be derided as from the squidgy end of science. The new list tribs a number of STEM women after whom species have been named. In general when fenaming species, men carry on in their usual objectifying women way - tribbing royalty and celebs rather than actual working women in science. Calypte anna, a hummingbird, for example is homage to Anna Masséna, Duchess of Rivoli. Beyoncé, Lady Gaga, and Angelina Jolie all have creepy-crawly eponyms. The promotions to eponymhood on my final list, the linked ones having featured on The Blob before, are:
That brings the ratio to 12F:14M = 46% which is better than the representation in the EU parliament. Estonia 55%; Ireland 50%; Malta 67%; Finland 54%; Sweden 55% are the only countries that elected more women to Strasbourg than we promoted to Eponymbourg. I decided that we can do some small-small thing about redressing the eponym imbalance and have instituted a competition: 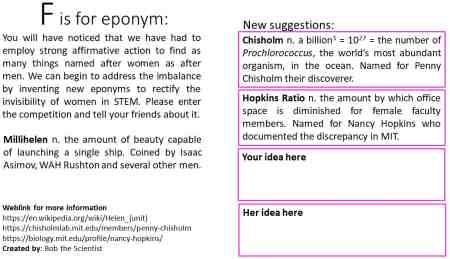 My suggestions [above] may not be readable on your m.device, so: