"The apparel oft proclaims the man" was part of the sententious advice given my Polonius to his about-to-leave-home son Laertes. Mark Twain sacked that lofty sentiment with “Clothes make the man, naked people have little or no influence on society”.

I had a bit of a dilemma last week at Conferring of Degrees. The Institute, founded in 1960, has an academic procession with gowns which the management believe to be "in the tradition of Bologna U" [founded 1088!]. They are so desperate to have faculty participate in this harmless nonsense that the college pays a gown rental company to supply the medieval clobber appropriate to each person's place of graduation. Students otoh are required to pay €27 to rent their gown for 2 hours. I don't do medieval and think an Institute of Tech should look forward not back. Another annoying aspect of the cos-play is that women, but not men, are provided with a mortar-board. Why? I have no idea how the management justify this discrimination but my female students say it symbolises a cap to the academic progression. The Man, reluctantly, allows women to have 4 years in college but regards higher qualifications as Men Only.

Whatever my gripe about faux-traditions, I do like to turn up to see all the students who have passed through my labs and classes get their certificates and go out into the wide wild world. What I usually do is get into my Next funeral & wedding suit and bear witness with the grannies. I think wearing gowns is, well, silly but I'm not going to parade my feelings by being the only one in the academic procession who is wearing a sharp double-breasted suit, an Old Etonian tie and no gown. I'm not about to explicitly or implicitly criticise the people who tog up for themselves or the parents or This gives me the chance to tally up the graduates by county because data is data. This year one of my students, whom I have mentored for 5 years, was finally getting the scroll and the big floppy PhD hat. I didn't go to my own graduation, so I really wasn't about to go to Lar's just so I could 'hat' the fellow. Luckily for my punctilio dilemma, I was no longer formally his supervisor. Three years ago, he applied for external funding and was rejected because, among other things "the supervisor lacks credibility in the field". That comment was entire on the button: the only thing I know about water chemistry is that it comes out of a tap and takes on a colour if you heat it and throw in a tea-bag. So I let Lar get hatted by proxy by a real water-chemist who don't mind wearing an academic gown. I was watching from the audience, though, and was the first person after the President to shake his hand. Here he is on your left, his right with the three other PhDs and one MSc graduated on the 1st Saturday in November 2018. Hats off . . . hats on? Hats off! 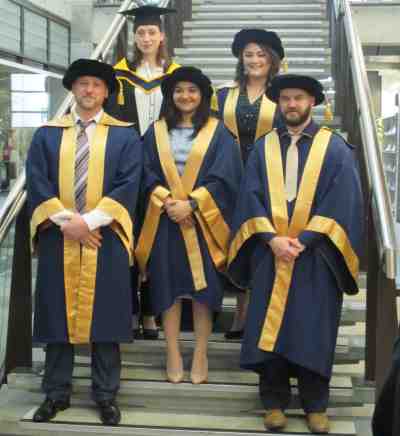