Rubeola on the rise 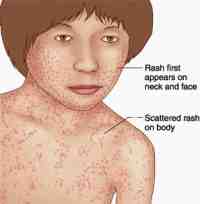 I've written about The Measles before: how The Boy contracted a dose aged 2 because we couldn't do the math on vaccination. Measles can be a serious disease, the virus starts on the face and spreads south but characteristically infects the eyes, the mouth and down the mucosa of the trachea and lung. The immune response involves a certain amount of inflammation with accompanying tissue damage. That opens the door to secondary bacterial infections resulting conjunctivitis and pneumonia. Oh yes, and encephalitis too. These can be seriously damaging: blindness and death are possible. If the kids are reasonably well fed and have a warm dry place to ride it out, then the immune system gets on top of the virus in a week or so and is primed forever against the disease. If you are poor, the negative outcomes are far more likely. Because of the virtues of herd immunity educated, well-fed, readers of The Blob should get their kids immunized because it is free and because that will help protect the dispossessed. Because measles is so highly infective, it requires 90% vaccination compliance. Smallpox and polio didn't didn't disappear from Europe [variola virus is still maintained in biowarfare vaults in UK US and RU] because lots of people switched to rooibos tea. 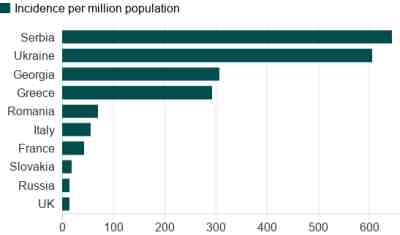 Across Europe we are currently in an up-blip of measles.  In the first half of 2018, there were 40,000 cases reported in Europe with a death rate of about 1 per 1,000. That graph is an interesting way to display the data because cases/million emphasises the poorest regions with the crappiest health care rather than those with the largest population. Despite the small bars, there are still a couple of thousand cases in France and Italy. Ignore the death rate, maybe, [what's 37 dead babies far far away?] but it is a surrogate marker for a lot of adverse side-effects: the deaf dumb and blind kid may play a mean pin-ball but you wouldn't wish that trade on your own children. The merely damaged don't get reported in the press.

One problem is that truth has gone out of the window in public discourse. It might be too much to expect Joe and Jane Public to be able to carry out a risk assessment because that involves an engagement with large numbers and statistics which is not everybody's cup of tea. The new way of assessing difficult data - difficult as in contrary to our cosy status quo - is to nonsense it as a government plot. To cry Fake News is just laziness amounting to being deaf dumb and blind. Your family will probably be fine if you shirk vaccination: The Others [refugees, travellers, the poor] will be looking for a small white coffin which they cannot afford; or more likely a little white stick to help their kid find the edge of the sidewalk.
Posted by BobTheScientist at 06:36