Cry havoc and let loose the fools of war

Running up the centenary of the end if WWI, it is time to reflect on military matters. If I had friends or a drink problem or, heck, a television then I wouldn't watch as much youtube. I'd be down the pub talking shite and skulling pints and having a great time. As it is, far too often, I check in to youtube to see what its algorithm will deliver, personalised to me. And boy, do I ever regret watching Russian tractors pulling each other out of quagmires in the forest because there is an endless supply of such videos and several are presented each time I check in. I wish there was a random button, like I discovered in the basement of TCD library for getting 'unexpected books' to while away a weekend.

Anyway for the last week the youtube algorithm has been persistently surfacing McNamara's Folly: The Use of Low-IQ Troops in the Vietnam War a 30 minute piece-to-camera / reading by Hamilton Gregory [who he] author of a book of the same title. Robert McNamara was the longest serving Defense Secretary in US history. He was recruited by John F Kennedy (from being President of Ford Motor Corp!) in 1961 and served Kennedy and Lyndon Johnson through the worst part of the Vietnam War until he left in 1968 . . . to become President of the World Bank. Somebody must have thought that he did something right. 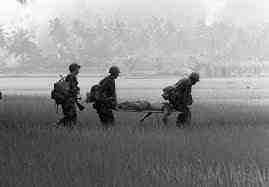 Hamilton Gregory volunteered, as a college graduate, to serve in the US Army at a time when all his college chums were getting exemptions from the draft because they were smart enough do the math of survival in the jungles and paddy-fields of Vietnam. He finished up working as a spy for US Army Intelligence but coming through boot camp he encountered a number of intellectually-challenged draftees and/or volunteers. They had been swept into the killing fields by a cunning plan cooked up as part of Lyndon Johnson's War on Poverty which was, commendably, going along in parallel to the War against the Impoverished in SE Asia. This plan was called Project 100,000 and was dreamed up by McNamara and his apparatchiks in the DoD. 100,000 (each year!) was the shortfall in the number of grunts that needed to be shipped to Vietnam as replacements. Project 100,000 allowed the draft to take anybody with a beating heart regardless of their intellectual incapacity. These young recruits were recognised soon enough, not least because their military file had a big red letter on the first page to indicate the nature of their disability. Fellow soldiers with compassion used the collective term McNamara's Boys; regular soldiers used a rougher term

Gregory's first encounter with the Project happened on the day he joined because he was detailed to deliver a youngster from the recruiting centre to boot camp in the next state. This fellow had been born and raised in a hollow in the foothills of Tennessee Appalachia. But he didn't know that of himself; not could he read or write or tie his own boot-laces or reliably turn left when ordered to do so. His platoon had to make his bunk because he'd never met sheets before and the Army is particular about how the bunks look for inspections. It reminds me of my mother's tale of inducting young factory girls into the ATS who'd never worn underpants, washed but rarely and who were crawling with lice. Later in Asia, Gregory encountered many more of these pathetic scraps of humanity, some working away in relative safety peeling spuds or cleaning latrines but far too many out at the front. Their death rate was 3-times that experienced by lads whose IQ was in the normal range.

The boast from the DoD that the army was making useful citizens of these impoverished and damaged young men was rarely bourne out statistically. One post-hoc study divided 100,000 candidates between those who served and those who were allowed to stay within their familiar limited horizons. The latter group performed better and had better prospects than the Boys who had been 'helped' by the Army. It seems a cruel and abusive punishment to ship a fellow out to serve in a war of whose existence he wasn't aware until they gave him an M-16 and a haversack full of grenades and pushed him into a helicopter. What was far more concerning to fellow soldiers was that the Boys were not only a liability to themselves but also a danger to those around them. Friendly fire is common enough in the fog of war but if the bloke behind you doesn't know if his M-16's safety-catch is on or off and his boot-laces are untied then that's a whole, rather immediate, zone of potential fatality.

Strangely enough, on Sunday afternoon I was talking in our yard about another example of being quite casual with the lives of fighters.
Posted by BobTheScientist at 07:30