When duty whispers low thou must

. . . the youth replies "I can" [Ralph Waldo Emerson]. It was the last weekend in the month, must be a Film Soc night. Was to have been on Saturday but it was bumped 24 hours so that our neighbour Mike could rest in peace in the church next door - and tea and sangwiches could be served in the hall where we usually show films. For November, the selection committee for the Blackstairs Films-with-subtitles Society picked Wajib,  a road movie by Palestinian director Annemarie Jacir. Thelma and Louise it ain't; but it's an interesting unpicking of the challenges of living with other people while being true to your own values. 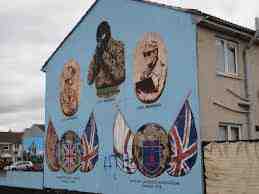 Shadi comes home to Nazareth to help the family prepare for his younger sister's wedding. Nazareth is a Palestinian town embedded in the North of Israel so it's a bit like living in a Catholic town in the North of Ireland 40 years ago: it's hard to drive around town without seeing dozens of squaddies in uniform. It's edgy because you know that the conscripts' weapons have a magazine of live rounds and you hope they have the safety catch ON. But it is also the new normal and you can't be having an adrenalin rush at every encounter: you'd be wrung out by lunch-time. Shadi has been living in Italy for the last several years a) because he's educated and there are no jobs for Christian designers in Israel and b) because he'd been an angry young man who bridled at the inequities of the place where he was brought up. He sticks out at home because he wears red trousers, a pink shirt and his long hair tied up in a bun. But he casts fresh exile's eyes on the invisible background of his birth-place: the streets are awash with domestic refuse . . . and soldiers in uniform come into the same falafel-and-houmous place where him and his Dad go for a mid-morning snack. It's like the propaganda gables [above R] in housing estates in The North in the 1970s - they were just there for the kids who lived round the corner. 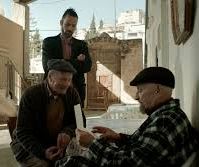 It's not an exciting film because there are no car chases, indeed chunks of time passes as Shadi and his Dad sit in gridlock. They are in the car together because of Wajib - Duty - that requires the family to hand deliver each wedding invitation and accept tea, another tea, more tea and cakes in return. They also have to stand a barrage of polite enquiry and unspoken tsk tsk criticism of their choices, their morals and their standing in society. And who gets an invitation? There is a list decided by quite rigid protocol, which is adhered to lest offense be taken. They have to invite singers who can't carry a tune; Dad's boss who was mixed up in Shadi's enforced exile; all those yahoos from the groom's family; the widowed aunt whom protocol demands cannot attend because she is a single woman; the cousins because they are cousins. Don't even think how much this is all going to cost.

And all the time, both father and son have to button their lips about the failings of others and soldier on through the social mine-field that is a small tight-knit society. The stress exposes the generational difference: the younger man can act on his principles with righteous anger because he has nothing to lose but his life; and all young men know they will live forever. The father has far more hostages to irredeemable  misfortune: his children, his home, his carefully built standing in society (he's a teacher). His principles are tempered by pragmatism, and perhaps by compassion: it's easier for everyone if you tell a few white lies so that your neighbour's cosy belief system is not challenged. Just like any community, in fact.

If you're intrigued by the tribulations of living in Israel and like falafel you might check out the late lamented Anthony Bourdain's 45min programme about eating in Jerusalem.
Posted by BobTheScientist at 07:28