As good as Curie

Science Week motors along. Busy, busy yesterday. I started with a 1st Year Cell Biology class that generated beautiful results from a rather clever experiment to determine just how sweet a potato is. Not a sweet potato Ipomoea batatas! The regular "Irish" potato Solanum tuberosum is not as sweet as as a bowl of breakfast cereal but it's got a lot more sugar onboard than plain tap water.  Me, I love data, but there's something particularly exciting about data that has been generated fresh by students before your very eyes. 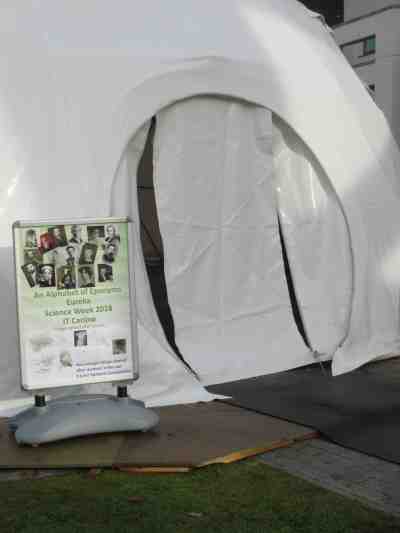 Accordingly I was quite bouncy at 11am when I went out to the big steel-and-canvas Science Week geodesic dome [above] to check on my Science Week project inside: 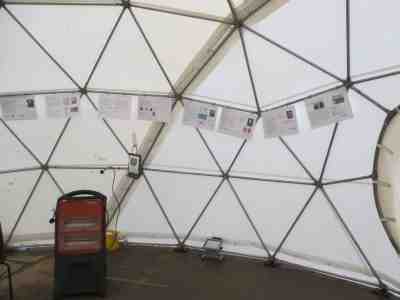 The things hanging from the horizontalish struts are the 26 posters for my Alphabet of Eponyms. I was expecting a trolley loaded with free tea-and-coffee-and-fancy-biscuits but all I found was 1 chair, 1 table and 1 very necessary space-heater . . . and about a dozen schoolkids with their teachers from Selskar College, the Vocational School in Wexford Town. Vocational Schools are scattered across the country. They cater for those youngsters who maybe care a little less about academic abstractions and are more interested in practical skills and things you can see and measure and knock into shape. In this case, in this town, it the only secondary school catering for those families which think that boys and girls should be in the same classroom. Whatever, these kids seems to be having a lot of investigative science-fun playing with the acoustics of the dome: a whisper on one side can be clearly heard over the hubbub if the receiving ears are exactly opposite. They are just the sort of kids - curious, engaged, give-it-a-go - whom we'd love to have in The Institute in a couple of years time.

Two of the girls were occupying the 1 table and 1 chair . . . and working on the Eponym competition while their class-mates were doing Practical Acoustics 101. Despite much pencil sucking, the girls were coming up empty so I asked if they could name any female scientists.
"Mmmble Crmmble", one of them replied [the acoustics were really terrible in the middle of the space]
"Say that again"
"Marie Curie"
"That's okay, but she already has something named after her; do you know any others?"
I was distracted by something else [not the arrival of the tea-trolley, harrrumph] but when I came back to them, they had an answer.
"A Gabriela!"
"Ace! which scientist is called Gabriela?"
"Me!"
Bouncy as I already was, that was the mostest, bestest, brightest thing that had happened all week. Here was a 15 y.o. young woman who had a degree of self-belief to say that a) she was a scientist [I blame the engaged young men who were their teachers] b) she was, or had the potential to be, every bit as good as Marie Curie [I blame herself for that, helped by her pals and her family]. Curie snagged two Nobel Prizes, I'll wager €1 that Ms Gabriella wins one. This may remind you of the great Ken Robinson story about a young girl drawing a picture of god: "They will in a minute".

We weren't finished because the name had yet to be pegged on something. After a couple of minutes the pair had decided that a Gabriela would be a measure of stress. Not engineering stress, but medical stress. With a little help from their teacher and a suggestion from me about salivary cortisol [prev] being used to measure stress we finished up with a novel Eponym:

Gabriela [Gb] n. A measure of internal stress.
1 gabriela = 1μg/dl cortisol in the blood.
Me? Stoked!
Posted by BobTheScientist at 07:17