I'm three weeks back in the saddle with Food and Fermentation Microbiology aka F&F having been forced to take a year out last year because of low numbers. We usually start off with Pseudomonas, a very large class of highly variable Gram-negative bacteria quite closely related to Escherichia coli and Salmonella. I wrote them pink because that's the colour such bacteria appear after being put through the Gram staining protocol. Pseuds are highly variable because they have 50% more DNA, more genes, than E.coli which at N=4000 has plenty. Those extra 2000 genes gives Pseuds an amazing amount of extra biochemical capability. They can make a living out of pretty much any organic material. It's not true to say that all Pseuds can eat everything; more like: there is nothing that cannot be consumed by a strain of Pseudomonas somewhere.

The standard approach in F&F is to isolate each class of bacteria from a likely source and then spend a few weeks investigating their properties with various microbiological techniques, often involving Petri dishes. Pseuds are ubiquitous, you find them everywhere: in water, in soil, in your fridge, in the Burns Units of hospitals. The students and requested-and-required to bring in suitable samples: well-water, garden soil, a scoop out of the River Barrow on the other side of the road, a bit of old meat from the fridge. Hey what's with the fridge already? Well, pseuds are often able to grow at 4oC, so your fridge will keep the coliforms in check but if your ham may develop a slimy film of Pseudomonas if left there for a couple of weeks. We isolate the pseuds (from all the other low-life microbes that inhabit soil, water and old meat) by growing them on either 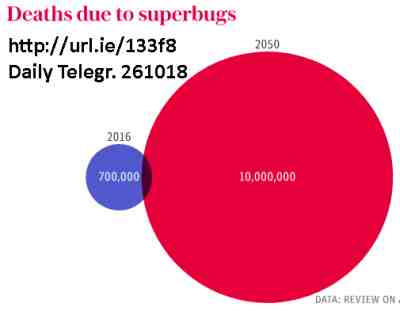 That Reactographic page break indicates a change of pace and direction from little old us doing science at the Institute to a worrying lethal threat looming on the horizon. I include it as a shameful example of informationlessness - a silly coinage strangely appropriate to a silly picture. Why does the small blue disc overlap the big red one? The 00,000s in the numbers indicate that they are just guesses. Why do you need a graphic to compare just two [estimated] numbers?  I'm a little wound-up because the superbug wot everbode kno is MRSA = methicillin-resistant Staphylococcus aureus, which is completely unaffected by the novel antibiotic Cefiderocol discussed in the article: because it is Gram-positive.

Cefiderocol is a variety of cephalosporin and they are both examples of siderophores - relatively complex molecules than form pores in cell membranes and efficiently pump stuff out (or in) to the cell. In the war between bacteria and the immune system, one of the immune tricks is to deplete iron locally. The infecting bacteria become avid for iron and Cefiderocol piggy-backs on the iron to gain entry to the interior of the bacteria. This new therapy is not really new, but even me-too drugs in an existing class of drugs are helpful in the battle against multi-drug resistant pathogens.
Posted by BobTheScientist at 07:40