You say potato, I say osmosis

It's great when things work out in the laboratory. When I started teaching Cell Biology to our Sporty students (Sports Rehab; Sports Physiol; Strength and Conditioning) we had a number of practicals involving blood. Discovering everyone's ABO blood group for starters; making a blood smear and counting the number of red and white cells [should be in 99:1 ratio]. With a protocol for getting fresh blood from students, we were able to use the red blood cells RBCs as a convenient source of fresh cells.  Obviously a course called Cell Biology needs everyone to find out about cells: their structure and function. One thing to learn is that all cells are surrounded by a semi-permeable membrane SPM: the cell membrane allows a few things to pass freely (water, oxygen and carbon dioxide) and blocks everything else. If you want glucose to enter a cell you have to open a special pore and that only happens if insulin triggers the insulin receptor on that cell. SPMs are efficient at maintaining homeostasis in the cell, which means that the concentration of the dissolved stuff (glucose for example) is the same inside and outside the cell. If water is the only thing that can freely pass the membrane, the homeostatic effect is for water to flood across it to try to equilibrate the sugar concentration on both sides. We set up an experiment where we put fresh blood cells in glucose solutions that were more concentrated, less concentrated and just right and then observed what happened. Cells crinkled up or ballooned or stayed the same: can you predict which? [answer]

Then, abruptly, our management and the spirit-of-the-times caught up with us and came down about contaminated blood products, and blood in general being a potential hazard. What if a student caught a horrible disease from handling a slide smeared with some other student's blood: what an expensive law-suit that would be. If we couldn't use blood what could we do to investigate this phenomenon - called osmosis, as you ask - what could we do? Borrow an experiment from another Course, of course! 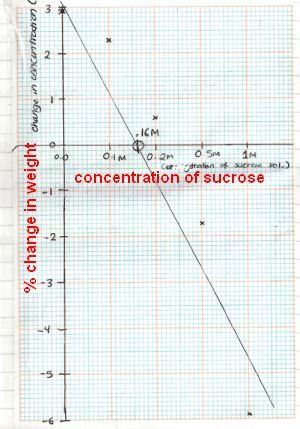 And so was born the hypothesis testing with spuds experiment. The idea is to use potato cells as a safer alternative to human blood cells. You can't easily watch them pucker up down a microscope but you can weigh them, before and after immersion in different concentrations of sugar. Potatoes contain some sugar but aren’t sickly sweet, so 1.0M sucrose will be hypertonic to potato. Distilled water will be hypotonic to potato. First catch your potato and punch out cores with a cork-borer. Then slice discs about 5mm thick as your experimental objects. Do you expect the potato disc in 1.0M to gain weight, lose weight, or stay the same? What is your expectation with the disc in plain water?
[1M solution of sucrose has 342g of sugar dissolved in a litre [1000g], so it is a sticky disaster if anyone spills it, or slops it. I know, we've been there.]
Last year, it was a mess and not only the sticky one. The students' data was all over the shop: they couldn't work out how to record the data so that %weight-change was easy to calculate; and the actual measurements went up and down like random yoyos under anti-grav. I rewrote the protocol with two important changes.

A lo! [above] the first book I looked at for marking had a very scientific looking record of the data, showing that as the external concentration of sugar increases, so it sucks water from the spud and lowers its weight. Nicely the descending line crosses the point of zero-change at a particular molarity of sugar which you can surmise estimates the sugar concentration of potatoes. = 0.16M - not a lot of people know that. But don't take my word for it: You can do this at home if you can borrow a balance that weighs 1/10th of a gram.
Posted by BobTheScientist at 07:43