The EU is likely to implement the abolishing of shifting the clocks twice a year. This is a good idea. Irish Dept Justice is asking for a votes on whether to go with GMT, what they call Wintertime, or Summertime. In Wintertime the sun is highest at Noon, in the natural way ordained by the gods, Summertime is a trick-about nonsense that wrecks people's bioclocks and causes deaths. Actually it's the change that kills, but Wintertime is still better.  Please tell them. you have till St Andrew's Day = tomorrow.

Meanwhile back in the PRC. . .
Five years ago I confessed to being pathetically ignorant about the geography of China. I could name more cities in Finland [pop 5.5 million] than in China [pop 1390 million]. We have a final year student who has been in The Institute for the last 3.5 years - since I had him for math classes in 2015. He has some sort of diplomatic connexion or his father a professor back home: I haven't enquired too closely. Then at the beginning of this, final, year a young woman was parachuted in from the PRC to complete her education in Ireland. I have the two of them for one lab class. I think that she's quite lonely, a long way from home, with her peer group a bit cliquey and her English isn't great, which doesn't help. I make a point of being kind to her because I was in a similar position when I went abroad for Graduate School in Boston. If she needs help with practicalities, she inevitably asks her compatriot. I earwigged them chatting in Chinese [Mandarin, although I wouldn't know that] last week and I asked if they spoke the same language at home. The answer was a qualified yes: the woman comes from 陕西省 shaanxi shensi and she speaks Zhongyuan Mandarin. The chap is from山东省 Shandong and uses Jiaoliao Mandarin at home. Both are 'Mandarin' and more or less mutually intelligible but I think they speak standard Beijing school Chinese in Ireland. 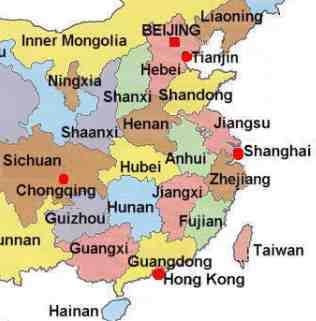 Next question was "How far apart are your two home cities?". Each had a different, and rather enigmatic answer:
"27 hours on a train"
"About half a Europe"
Distance 临沂 to 西安 is about 950km. That is about the distance from Brussels to Bratislava which is about half the distance from Brussels to Bucharest. So half-a-Europe is okay if you exclude Russia from Europe. I was talking about this with a young friend from India and she said traintime-as-distance is very common where she comes from as well. And she was equally crap as myself for naming cities in the PRC. The five red dots are 'direct controlled municipalities' and all in the top ten biggest cities. I bet you couldn't name any of the other five biggest cities, all of which hold more than 7 million inhabitants.

You want to be a little careful with your ears and the various options for transliterating the sound of Chinese names into the Roman alphabet. It turns out that there are two adjacent provinces in NE Central China [see map R]:
陕西省 Shaanxi and
山西省 Shanxi and for comparison
山东省 Shandong
Notice that they all terminate with 省 which must mean 'City'. The Shan 山 in Shanxi is that same as the Shan 山 in Shandong and the 西 is -xi in both Shaanxi and Shanxi.
陕西 means Shan Pass, West of
山东 means Mountain, East of
山西 means Mountain, West of
all very logical. Just be careful when getting on the train to Shaaaaanxi; you might finish up 200km from where you want to be.


Posted by BobTheScientist at 07:13