Maria Köpcke, whose 90th birthday it might have been today, came to an untimely end in the Peruvian jungle sometime between Christmas 1971 and New Year 1972.  Nobody is certain how long she survived having been blown out of the sky by a lightning strike on the plane in which she and her teenage daughter were travelling. We've met the daughter Juliane before as well as another passenger Werner Herzog who cancelled his seat at the last minute to check out additional scenes for is monster film Aguirre, Wrath of God. Köpcke the elder was a famous ornithologist after whom Megascops koepckeae (shown starey-eyed on the right) and Phaethornis koepkeae (not to scale centre) and Cacicus  koepckeae (with epaulettes on left) are named.  At least two of these species are threatened by habitat-loss in Peru. 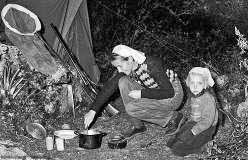 But if that extinction-is-forever scenario has been put on hold for a generation or two, it is at least partly thanks to the efforts of Maria Köpcke (here shown cooking dinner with her daughter Juliane) and her husband Hans-Wilhelm who were instrumental in creating the Panguana Nature Reserve - 200 ha of central Peru which is reemote, jungly and hilly and of extraordinary biodiversity.  There are, for example, 58 species of bat on the premises which is twice the number found in the whole of Europe and there are more bird species (N=353) than in the whole of Germany or Ireland.  You can imagine why the likes of Charles Darwin, Alfred Russell Wallace and Henry Bates were shocked into creative explanations by being exposed to Tropical diversity after growing up as bug collectors in England with its impoverished fauna and flora.
Juliane was the sole miraculous survivor of the crash but we've heard of her because she gritted her teeth and walked herself out of the jungle trekking watercourses down-stream and finally following the sound of a hoatzin (Opisthocomus hoazin), a bird that she knew inhabited the edge of open and therefore navigable and inhabited water. The advantage of being educated at least partly in the jungle field-station run by her parents is that Juliane was empowered to take control of her disaster. Just before meeting people for the first time in a fortnight, she drenched her arms in gasoline to evacuate the maggots that were making a meal of her. I think that makes her a hard-chaw.

She had just graduated from high-school (at the graduation ball, left) and went on to Christian-Albrechts-Universität zu Kiel after her South American adventure to read science like her parents.  She eventually obtained a PhD on bats (Thesis title: Ökologische Studien an einer Fledermaus-Artengemeinschaft im tropischen Regenwald von Peru) from  Ludwig-Maximilians-Universität München and has spent a lot of time and effort progressing her parents' work trying to carve out a nature reserve in the middle of Amazonia as well as holding down her day job in the  Zoologischen Staatssammlung München.  I think her mother would have been justifiably proud.

Metafilter recently carried a list of Herzog's films which are available for streaming free, including Wings of Hope, his documentary, 25 years in gestation, about Juliane's arrival and departure in the jungle. Or you can read Juliane's own version in her book Als ich vom Himmel fiel.
Posted by BobTheScientist at 06:46