It's four months since I brought a bucket of frogspawn + mud + moss + grass-clumps down to the garden and installed them in 40 lt plastic crates. By 1st March, they had hatched into tadpoles and since then they have been wriggling around: so they aren't dead yet. But they aren't frogs neither. The weather has been scatty and unpredictable this Spring with long dry spells; several of the original puddles in the woods have dried up taking the unfortunate tadpoles to oblivion . . . but providing nourishment for the other inhabitants of the forest But (I checked last Thursday morning) there are still puddles in the same place up in the forest. 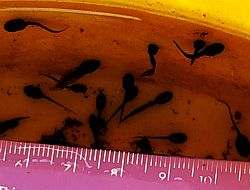 Dau.II was visiting in May and spent a bit of time observing the captive tadpoles, claiming that at least one had two back legs. This has the ring of truth because back legs appear before front, at least for Irish frogs. But I couldn't replicate this finding despite scooping several glassfuls of tea-coloured water and inspecting the inhabitants. Suffice to say, I am concerned that there will be no metamorphosis into the adult form. But a few days ago I had an insight which I hammered into a hypothesis and carried out an experiment. Anyone can have an insight, but it helps if you have several threads in your head to increase the likelihood that they will tangle into a skein from which a metaphorical ideas-jumper may be knit.

In the back of my mind is the 'fact' that our farmlet, along with most of the farms on granite bedrock hereabouts, is deficient in Selenium. We and our sheep don't need buckets of Selenium - indeed it is toxic in excess - but we need enough. Then there was my book-l'arning about amphibian development; in particular the peculiar life-status of the axolotl Ambystoma mexicanum, a neotenous salamander which comes to maturity still having gills instead of replacing them with lungs as the legs develop. Neotenous means 'retaining baby features'. Humans, as a species, are neotenous: our adult skulls look far more babyish than baboon skulls [pic]. Axolotls are on the very edge of extinction in the Mexican wild but there are numerous lines in labs, aquariums and pet shops. Axolotls fail to metamorphose into salamanders because they have a mutation which prevents them from producing TSH thyroid stimulating hormone. Without TSH, there is no thyroxine, and without thyroxine there is no metamorphosis. Having acquired a mutation which might mean the end of the line for Team Axolotl, there was considerable evolutionary pressure to make other changes. These changes included bringing on the development of gonads in a thyroxine-independent way. And that genetic solution worked until Mexico City polluted all the lakes in which axolotls normally live.

I've had occasion to teach thyroxine in my endeavours to present the Joy of Human Physiology. Thyroxine is the 'metabolic hormone': ginning up a whole host of other activities so that we work efficiently. It is peculiar in that this hormone incorporates iodine into its functional structure. Iodine, like selenium, is thus an essential micro-nutrient and if you can't get enough you're in trouble. Goitre, Derbyshire Neck, is one manifestation of iodine deficiency in the diet. Iodine also made the news 20 years ago, when The Man delivered anti-Chernobyl.II tablets to every household in Ireland.

My hypothesis developed as the idea that 'my' tadpoles were slow to embrace adult life because they were iodine deficient. Last week therefore, I got my ex-colleague A to score me 30g of potassium iodide KI which I made into an aqueous solution and added to my two amphibian ponds. The molecular weight of KI is 166, so 166g of KI dissolved in 1 lt of water gives a 1 molar solution [mole prev] which contains 6.022 x 10^23 molecules of iodine.  I dissolved ~16.6g [tenth of a mole] in water before adding it to two 40 lt containers; so there are only 6.022 x 10^22 or 6,022,000,000,000,000,000,000 iodine molecules to share among a couple of hundred surviving tadpoles. Should be enough.