It's Alan Turing's birthday - 103 today 23 June. My Granny lived to 108, so it is unlikely but conceivable that Turing could still be contributing to the scientific literature even now.  As we know from The Blob, he ate a green apple, laced with Prussic acid, and died on 7th June 1954 just before I was ready to make my appearance on the world.  Most of us associate him with his work on the application of mathematical abstraction to the problems of cryptography and computing.  His theoretical Universal Turing Machine is a key concept in the development of computers, his Turing Test is the gold standard for artificial intelligence and, of course, his work in Bletchley Park won WWII for the Allies.  Note to self: must get to see Cumberbatch in The Imitation Game.

But get this, Charles Darwin not only gave us the Origin of Species, he also explained how coral reefs are formed, noted that blue eyed cats are more likely to be deaf, calculated the recycling rate of earthworms, discovered plant hormones and knew more about barnacles than anyone except James Joyce [hilarious intellectual arts/science joke: Nora Barnacle . . . Bloomsday . . . geddit]. Turing also made a ground-breaking contributions in another field but it were so far ahead of its time and the mathematical ability of the scientists who stood to benefit, that Turing was long dead before his 1952 paper The Chemical Basis of Morphogenesis was widely appreciated. Not being a polymath or a genius, I didn't even know about Turing's paper until I read an essay by Philip Ball on the reception and ramifications of Turing's paper in the festschrift celebrating 350 years of Phil. Trans. R. Soc. Lond. Philip Ball is something else again, he seems to be able to write a book a month about anything at all so long as it's science.  The essay is for scientists, this video is for Joe Public. 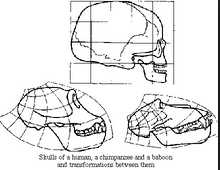 Turing's paper gave a mechanistic explanation for a conundrum that had delighted and baffled naturalists since Aristotle and Pliny: how did the leopard get its spots? [whoopwhoop Kipling alert] Having made the observation, scientists, story-tellers and spoofers [not always easy to tell apart] have been quick to come up with an explanation for Why? Such as:
"Is a zebra a black horse with white stripes or a white horse with blacks stripes?"
"Neither, it is an invisible horse colored black and white so people don't bump into it by accident"
. . . but everyone had been woeful when it came to addressing How? Ball points out that Turing's paper only cites six sources; and concludes that this was because nobody before Turing had really thought about the issue.  One of those citations was D'arcy Wentworth Thompson's classic On Growth and Form, which took 1000 pages to investigate how simple topological shifts could create quite different physical forms in the natural world [L showing that our skull is essentially the same as a baboon's]. This implied that a simple mechanism might underlie the development of complex shapes from a simple spherical fertilised egg.

Turing treated this as a case of symmetry breaking and wondered what sequence of biochemical events could " . . . result in an organism such as a horse, which is not spherically symmetrical".  You don't have to be English to appreciate the waggish understatement but it helps.  Like Watson and Crick's famous "It has not escaped our notice that the specific pairing we have postulated immediately suggests a possible copying mechanism for the genetic material." from the following year.  Turing didn't give us a clue about what those biochemicals might be but he did outline the mathematics for how waves could be generated - waves here representing concentrations of morphogens: chemicals which can change the attributes of colour, shape or form locally. Waves like the ripples in the sand at low tide or in the Sahara Desert are caused by simple physical systems. Turing was convinced, and wrote the math to prove, that a similar simple physico-chemical explanation was possible to explain a zebra's stripes.

you don't have to be able to read the maths to realise that Turing made a major contribution to explaining diversity in the natural world.  Philip Ball lists at least 40 subsequent authors - in fields as diverse as predator-prey relationships, criminology, developmental genetics, ecology, evolution and molecular biology - who have stood on the shoulders of this giant.

Hats off and have a slice of birthday cake.


Posted by BobTheScientist at 14:09