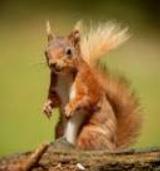 Squirrel Nutkin Sciurus vulgaris is [right] cute but I haven't seen any [yet] hereabouts. It's partly because I see nothing hereabouts because, when I'm outside, I'm usually blundering about disturbing the peace with a lawn-mower or saw. But in the middle of last week, a cock-pheasant Phasianus colchicus strutted across the yard and before I'd found a camera he'd been joined by his hennie. These birds are more usually heard grackling indignantly as they fly away from intrusive galumphing people. So it was nice to see them, from the kitchen window, passing through in their own good time.

I've seen loadsa pheasants in my time; but never in all my born days have I seen a pine marten Martes martes. Although several of my naturalist neighbours have. On Sunday morning we were pottering about and a pine marten lolloped through the gate to the haggard and started exploring the yard as we watched from the kitchen window. It was amazin' mystic, wonderful to see this top predator making our home their own. What's that got to do with the native squirrel? You may well ask. Because they are both making a come back in the Irish Midlands and there is some evidence that forward march together is not coincidental. Grey squirrels Sciurus carolinensis were introduced from North America to Ireland in 1911. They are bigger and bolder than their red cousins and have spent the last 100 years displacing the reds from their habitat. 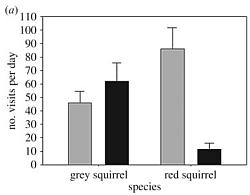 The argument is that red squirrels and pine martens have been living together since time immemorial and have come to an equilibrium in the evolutionary dance of life and death. Greys otoh are naive to that particular predator and haven't yet worked out appropriate defensive strategies. A recent study from QUB applied marten-smell to feeding locations and report that reds avoided such feeders after treatment whereas greys didn't. Fig 3a from that paper [R]. Fig 3c suggests that reds were more vigilant under the same conditions.

Another study from NUI Galway [PDF of original survey results] looked at the relative distribution of greys, reds and martens in 2007, 2012 and 2019. A lot of that data was crowd-sourced after an extensive publicity  campaign so that may cast some asparagus on the absolute numbers of reports [3,402 in 2019 up 20% from 2012] but there are significant differences in the proportions among the three species between the two survey years. On the face of it it looks like reds have gained ground in the Irish Midlands with a little help from the depredations of a resurgent marten population. 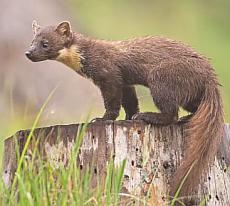 These studies were reported without any critical analysis by Richard Nairn in his Wild Wood book. Which is fair enough in a memoir. It's a pity I didn't get to referee either of these papers because, I would have devoted a day of my time to constructively picking apart the methodology and assumptions. With any effort at all I'll say a) If the hypothesis is that it is a specific pheromonal response to scent of martens, I would have used cat urine as a control rather than nothing at all. b) In the 3rd paragraph of the results of the NUIG survey a number of 3 [species] x 2 [years] contingency tables have been analysed with ChiSq. They have looked up the resulting numbers as if there are 3 degrees of freedom. But that's almost certainly not true. There are only 2 d.f. because once you've assigned numbers to #grey and #red then #marten is not 'free' to vary: it must be 1 - (#grey + #red). That's sort of okay, because using the wrong line of the table results in a more conservative test of the difference. Then again, if they can't do elementary stats correctly, critical readers are justified in giving side-eye to the rest of the study.

But here's an interesting anecdatum. Last year we had a plague of rabbits, really for the first time in 25 years. I constructed an elaborate [2x1s and chicken-wire] rabbit proof fence for the two ends of the poly-tunnel so that the rabbits were at least slowed in their depredations on the beans, lettuce and tomatoes. This year looked like being the same. A couple [pair, M+F, breed-like...] of rabbits were to be seen daily in the garden nibbling away at the greenery bold as brass. I would ineffectually peg small logs and large stones at them but I was girding my expectations for no cabbage in 2021. And then from about 3 weeks ago the rabbits weren't there any more and two weeks later a pine marten graces us with their appearance. Like Darwin's ruminations on the relative count of clover, bees, cats and mice; this is another example of my enemy's enemy is my friend.