How they brought to schwa to Carlə

I sprang to the stirrup, and Dau.II, and she;
I galloped, Dau.I galloped, we galloped all three;
‘Good speed!'’ cried The Belov'd, as the gate-bolts andrew;
‘Speed!’ echoed the wall to us galloping through;
Behind shut the postern, the ewes sank to rest,
And into the daylight we galloped on quest.

Whither gallop, me bold questers? 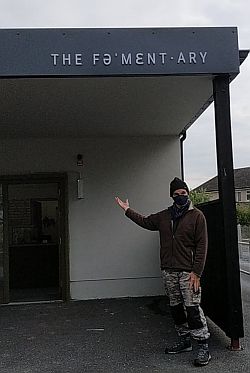 To The Fermentary ! next our new Post Office at the top of the one street of Borris:

Who knows how, when and where entrepreneurs take the plunge and sink their all into a new venture? I've been making annual cratefuls of marmalade for 20 years now, everyone loves it, a pot makes the perfect gift. Nobody has a bad word to say about the flapjacks either. I would never $ell the stuff, though - I just don't have the marketing and distribution chops: I'd have to scale up to satisfy demand; the kitchen would reek of Olde Seville; and I'd have contact burns all up my arms. Let's leave it at makes the perfect gift . . . perhaps with a small packet of flapjacks mit.

The Fermentary launched its retail outlet on the first weekend of June 2021. They might have had a slight failure in local marketing, because we heard about the event, after the event, from Dau.II in Cork. She's the foodie in the family, so hears the faintest distant drums of comestibility: cheese or cakes; charcuterie or . . . croissants. The next weekend, she came across the country, following her nose, to see if the product was good. The weekend after that, her sister Dau.I came down from Dublin. On dit que it was because my birthday went down during the week between these visits but good croissants have an irresistible pull to those who've ever had one. Or read the book!

The Fermentary is an offshoot of The Plúr Bakery in Newtown Co CW where the gaffer is James Jordan. They've been making sourdough and other fermentables for a while now and selling it at the Saturday Foodie Market in Kilkenny. There's a linguist in the batter there because their signage has a schwa for the untrilled first syllable Fə'mɛntary and an {IPA 303} for the second syllable. Me, I really like their aux amandes - good to the last crumb but the reg'lar croissants are great and they do a crusty, aery, tasty sourdough loaf. A batterie de kombucha is available on tap if you like your ferments by the glass. They open at 0800hrs Fr Sa Su and when the croissants are gone, they're gone, so get there early prepared to queue. Chocolatine? Pain au chocolate?

Well now, I've had a great many fine examples of  Viennoiserie this month and intend to spend my carbon credits supporting this local business every possible weekend until I burst or they go bust (which heaven forfend).