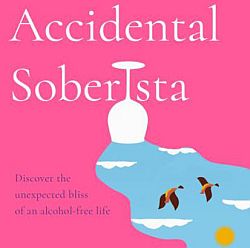 I've just finished audiobooking The Accidental Soberista: Discover the unexpected bliss of an alcohol-free life by Kate Gunn, well read by Caroline Lennon. Kate Gunn plunged like a duck to water into the post-dotcom internet bloggin' and blaggin' her way into the corporate world. She had the digital chops to help Capital show its shiniest face to the world. Good for her, I was there but lacked the imagination and the chutzpah to do the same thing. I started bloggin' just as it became old hat and influencers went Insta. Indeed I'd never 'eard of Kate Gunn before I saw her book on Borrowbox. But we have in common a tendency to over-share in our respective media. In 2019 Gunn published a book Untying the Knot about the dissolution of her marriage.

The Accidental Soberista is another confessional. Her post-wed partner Aodhán was medically advised to give the booze a rest, and Gunn elected to go along for the ride out of a sense of solidarity - and, I guess, curiosity. A significant support for the transition was the One Year No Beer campaign, which maps out some standard operating procedures for 30-day and 90-day modules of sobriety. If you can stay on the wagon for 3 months, you can probably do it forever. The argument is that it is possible to separate fun from alcohol and still have a social life, even in pubs, without feeling bleh the following day - Erdinger is your friend. You may need new friends as the sclera of your eyes return to the bright white of childhood because folks are not funnier when drunk . . . unless hilarious is synonymous with repetitive and boundariless.

The Accidental Soberista is polemical. With the ardour of the convert, Gunn wants to share her joy with everyone; which is captured quite cleverly by her book's cover design [above L]: emptying the wine-glass reveals a new world of clear head, clear skies, sunshine and fluffiness. But I think she and her editor have made a strategic error by emphasising her post-booze sporting triumphs. Successfully training for and completing a competitive marathon and a competitive triathlon is frankly unattainable for most people in the bar on any Saturday night. Humble-bragging about these achievements just makes it easier for Joe Boozer to flip her off as That Wagon Wagon and relegate sobriety to a winning-the-lotto fantasy.

I was on the wagon for the whole of 2012. Up to and including 2011, we had been in the habit of glugging down 2-3 bottles of plonk a week. That wasn't hang-over territory, although it defo required a designated driver if we were going out. At the beginning of 2012, the post-crash tide drained out of scientific funding and I was contracted down to one day a week of paid science-work. Time rich but cash poor. Three bottles of wine @ €7 is (7 x 3 x 52) €1,000 a year which was more or less what I was pulling in each month as a Senior Scientist. So I stopped consuming alcohol. It was a commercial decision and I didn't miss it. Years earlier I had, with the intelligence of a lab rat, made the connection between having four pints in a session and feeling like the armpit of Beelzebub the next day . . . so I never consumed 4 pints. Except when I did. Those instances were always when two pints drained my sense of judgement  enough to take a third and then peer-pressure and the round of the generous hand delivered #4 to the table and I (now well buzzy in the head) lacked the will to let it go to waste. Maybe other folks'' hang-overs are different but I can't imagine embracing a life where I reliably feel wretched every weekend morning.

The Accidental Soberista is only 3 pints at Kennys or €0.00 on Borrowbox. It prattles along in a chatty and informative style and presents some quite sobering stats about the costs of alcohol in Ireland - malaise, road-traffic accidents, mental health, cirrhosis. Running a feckin' marathon is entirely optional but for you the cost-benefit equation might be food for thought?