Listicles! How long is your attention span? If you're on Buzzfeed it will be 10 lol cat fails that make you fart or 25 ways to impress your boss's boss. Then there's meta-lists. QI expects greater stamina: I wrote about 1339 [2013] and 1441 [2014] but you'll have to hunt up books 1234, 1342, 1423, 2024 yourself. For academic-adjacent books 100 is a nice round number. A History of the World in 100 Objects by Neil MacGregor director of the British Museum was a magisterial romp through the BM collections giving context to each thing. Fintan O'Toole and the Irish Times had to clag up a derivative parity-of-esteem listarip-off  A History of Ireland in 100 Objects. Likewise, the linguist David Crystal compiled The Story of English in 100 Words in 2011 so the Royal Irish Academy RIA must contract for A history of Ireland in 100 words by Sharon Arbuthnot, Máire Ní Mhaonaigh, Gregory Toner, illustrated by Joe McLaren (St Brigid's Day 2019). Does that not show a certain want of imagination? 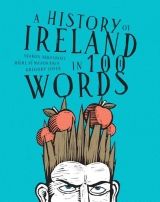 This endeavour passed me by entirely when published although I am exactly the demographic to buy a few copies for my gaeilgeoir pals. It took a flag from my cousin Trevor in NZ, who is a puzzle-cracking comparative linguist in his own right. I acted on that faisnéis and quickly located a copy, on a shelf, in Btown library. We were still a bit lockdowned at the time, but the librarian left the book outside on the TBC table, in a canvas bag, with my name on it. I get to keep the bag! Must do that more often.

And the book? It's fine, if a bit A camel is a horse designed by a committee (probably coined by Alec "Mini" Issigonis). MacGregor and Crystal wrote books with an internal coherence and one scholar's concentrated vision. The Irish me-too books are fuzzier and less focused because they are trying to please too many people. But ignore my snippy carping, if language is your beef, 100 Words will leave you well fed.

What they've done is pick their 100 words, presumably leaving many on the cutting room floor, and gathered them into 13 bins like Writing and Literature, Technology and Science, Food and Feasting. I was surprised and little bit smug to note how many of these Irish words I knew despite níl focal Gaeilge ina phluc because I went to school in England.

So the Science & Tech words?

Some of these and their essays aren't notably techy imho but maybe it was a case of a must-have word needing a bed somewhere in the book. Clog got me a bit all riled up. There is a backdrop of discourse here in Ireland which tries to deny that we ever got anything from The English except oppression and taxes. So under Clog: " The Modern Irish for 'clock' therefore, was originally the word for 'bell' and not borrowed from the English "clock" as might be assumed". But that's the origin of [English] 'clock' as well! So both languages have have a common root word. There's at least one other example of similarly tendentious explanation. harrrumph! The irony here is that the whole concept of the book is lifted from an earlier example in English written by someone educated in England . . . although born in Lisburn <huzzah!>.
Posted by BobTheScientist at 06:57