Long ago, I went to visit my mother.  As a treat she heated up her chip-pan to make french-fries and then we settled down to a chat in the other room until I smelled smoke [they say that men are better at that than women].  The chip-pan was blazing away on the stove and I carried it out of the back-door sustaining a few scorch marks on the back of one hand.  The fire blew itself out quickly in the cold air outside.  The kitchen ceiling needed re-painting.

Over the last couple of weeks inducting students into correct practice in The Institute, I've had occasion to recall this anecdote in the context of lab safety and Material Data Safety Sheets MSDS which we are trying to make more obviously available in all out laboratories, so that everyone is ready when something goes wrong.  There is an MSDS for every chemical known to man, from flowers of sulphur to cyanide and the new policy is to have an MSDS for every chemical that we intend to use in a particular lab at a particular time.  Me, I don't find them very helpful because for each substance there are 4 or 5 pages of small print dealing with skin-contact, inhalation, ingestion and nobody has written generalisations - acids treated thus, alkalis treated so - for the most commonly occurring events..  All that detail becomes TMI and, to a close approximation, nobody reads the damned things until the emergency occurs.  By which time it is likely to be too late.  ANNyway, I have held the MSDS booklet aloft like a Baptist minister and launched into a speech about how important it is to read and believe The Word.  Not least because an accident is more likely to occur to lab-klutz me than anyone else in the room.

As an example, I've said that contact with acids and alkalis is best treated by flushing with water [and in my only incident requiring an Accident Report Form, the student was doing this before I became aware that something was wrong].  But, I continue, dowsing in water is not a good thing for burning oil because burning oil is at 200oC and water is denser than oil.  Accordingly your cupful of water will sink to the bottom of the oil and instantly vaporize to fill 22 lt of volume for every 18 grams of water - spewing hot burning oil all over the kitchen ceiling and everybody standing in the room. Why 18 grams? Because that is the molecular weight of water (2H [1 ] + O [16] = 18) and 18 grams of the stuff contains 6 x 10^23 molecules. This is also known as a mole of water, American cooks call it a tbs.  It is a physico-chemical fact that a mole any gas fills 22 lts (a couple of buckets worth). 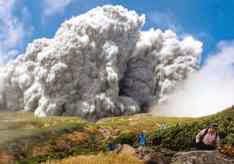 This happened on a much larger than bucket scale on the 27th September 2014 on Mt Ontake (御嶽山) in Japan. Ontake, a huge volcano (second only to Fuji-san) about 3000m tall and 200km West of Tokyo, is a popular hiking mecca.   Just before noon last Saturday, without any warning, the groundwater under the mountain was flash vaporised by a shift in the magma channels. Every tablespoon of water down there instantly required a couple of xerox boxes of space and everything in the way had to shift - mostly upwards. Such phreatic volcanic eruptions can be frighteningly powerful.  Krakatoa is the biggest example of such an event that we have reasonable data about.  Something like 20 cu.km of material was displaced including 20 million tons of sulphur.

In a phreatic eruption, you are unlikely to be killed by the super-heated steam, although that is the driver; you may be struck by a lump of rock the size of your head or you may disappear forever under a piece the size of a minibus; but you are most likely to run out of oxygen, like the submariners of the Nerpa.  Except that, instead of halon, the most likely gas to asphixiate you is carbon-dioxide, like the folks living near Lake Nyos.  Mt Ontake is now reeking of toxic hydrogen sulphide and rescue workers are hampered in their efforts to recover bodies, many of which will have been killed directly by this gas.  Not a good idea to stop and take a video.
Posted by BobTheScientist at 06:36